Greg Edge to be Crowned 2020 King of Baseballtown

Former infielder and long-time stadium worker a staple in Reading, an ambassador for the game

The Reading Fightin Phils have announced that Greg Edge has been named the 2020 King of Baseballtown. The award will be presented as part of the Baseballtown Caravan and Phillies Winter Tour on Tuesday, January 21st at the Crowne Plaza Reading. 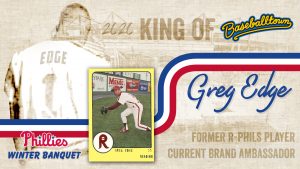 The award dates back to 2003, when “Broadway” Charlie Wagner became the first recipient, and the tradition of honoring an individual’s accomplishments and contributions to the Baseballtown community has continued each year since.

“It’s a beautiful honor,” Edge said. “It’s a true blessing from the man upstairs to be sitting here today and be able to accept this award.”

Edge has long been a familiar face at FirstEnergy Stadium, as both a Reading Phillies infielder in the late-80’s, and a member of the stadium’s Clean Team since 2002.

“I’ve personally known Greg Edge since I was a 19-year-old freshman in college,” said Fightin Phils General Manager Scott Hunsicker. “His impact on Baseballtown since he first played for the Reading Phillies in 1986 has been tremendous.”

A Sacramento, California native, Edge was drafted by the Houston Astros in the third round out of Sacramento City College in 1983. He elected not to sign, and went on to star as a shortstop at the University of Oklahoma. In 24 games his final year, he hit .325 and did not commit an error.

When personal issues threatened to end his chances to play professionally, the Phillies recognized his character and potential, and offered him a contract.

Edge made his professional debut in 1986, a season that culminated in his first appearance in Baseballtown and a runner-up finish in the Eastern League Championship. He spent most of the 1987 season with Clearwater in the Florida State League before returning to Reading in 1988, where he was named to the Eastern League All-Star team.

The following summer found Edge in Reading once again, before his final three and a half seasons were split between the Milwaukee and Pittsburgh farm systems. He married in Reading in 1991, and retired from his playing career following the 1992 season. After hitting .252 in 174 career games for the R-Phils, he decided to make Baseballtown his permanent home.

As a player, Edge had forged a friendship with then-General Manager Chuck Domino, and maintained close ties with the organization even after the end of his playing days.

“I got to know Chuck real good when I was playing. He had just become the GM here, back when there would only be 200-300 people out in the stands, and he only had three people in the office working for him,” Edge recalled. “After my playing days we always had a good friendship, and he gave me the opportunity to come back here and work, and I’ve been here ever since.”

“I hired him for the maintenance staff thinking it would be short-lived,” Domino said, “But he kept showing up because it was close to the game he loves.

“Here we are 20 years later and Greg has settled into a life where he is happy for everything he has. He helps teach youngsters the game of baseball and he teaches everyone else the power of redemption, perseverance, and gratitude.”

Edge has spent the past two decades working at the ballpark as a member of the FirstEnergy Stadium’s Clean Team. The man known around the park as “Edger” washes the floors, empties trash cans, and touches up the paint, all for the love of the game.

“It’s not the glamorous job – I’m cleaning the ballpark – but it keeps me around the ballpark, it keeps me being able to see the kids coming up, seeing the Ryan Howards, seeing Jimmy Rollins and all of them coming up,” Edge said.

“It keeps me grounded. It keeps me around the game of baseball, and I love being around here. I love working here.”

Edge also continues to share his knowledge and passion for the game by coaching youth baseball in the local community. He currently coaches youth travel ball for an organization run by former Reading Phillie Michael Spidale, the Berks County Bulls.

“His story is unique, as his journey has taken him from being the starting shortstop for the R-Phils to his current role as a valued member of our gameday operations staff,” Hunsicker said. “But it’s Greg’s impact on the youth baseball and softball players of Baseballtown that make him most worthy of this honor.

“His extensive baseball knowledge, combined with his fun and supportive approach to teaching kids how to play the game, and how to love the game, make Greg an incredible ambassador for the sport, as he is still paying it forward to the next generation of kids.”

For Edge, it’s that moment that a child masters a new skill on the diamond that is always rewarding.

“You (get to) see the light come on in the kid,” Edge said. “You know when they’re struggling, and then all the sudden they get it.

“That brings joy to me, because that’s what it’s all about.”

Tickets to the 2020 Baseballtown Caravan and Phillies Winter Tour are available now for $25. The event takes place on January 21st and begins with a cocktail hour at 5:30 p.m., followed by the ceremony featuring the King of Baseballtown presentation and appearances from Philadelphia Phillies player and coaches starting at 7 p.m. To purchase tickets, call 610-370-BALL or visit the Weidenhammer Ticket Office at FirstEnergy Stadium. See https://www.milb.com/reading/events/caravan for more information.