Kelly Baumann has stamped her name in multiple categories in the Albright women’s lacrosse record books. From her breakout freshman season of 2017 where she earned her first of three-straight All-MAC Commonwealth Second Team honors, to becoming the program’s all-time leading scorer in the final game of 2020 against Kean, Baumann has turned in one of the most decorated careers in Albright women’s lacrosse program history. She became one of four players in program history to achieve the 200-point plateau in 2019, and ranks fourth all-time with 161 career goals. She also owns the program’s single-game, single-season, and career record for caused turnovers. 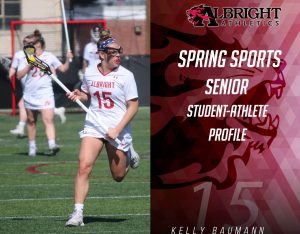 What is your favorite sports memory at Albright?
“My favorite memory at Albright was probably our 12-11 win against Messiah last year. We had never beaten them before and they were reigning MAC champions, which made it even more exciting. With 1:38 left in the game I was able to score the eventual game-winning goal. That excitement of beating Messiah and that goal celebration was one of my best memories.”

What are your post-graduate plans?
“In a perfect world, I would still be playing lacrosse at Albright. I would love to come back to play again for a fifth year, but depending on what job opportunities I get, will determine that. I plan on joining the FBI, so In the meantime, I’m working other jobs to get me better credentials to enter the FBI.”

What is one thing that you would like to say to current Albright baseball underclassmen/future Albright women’s lacrosse student-athletes?
“One thing that I would like to say is to cherish your time as an Albright Lacrosse player. Every coach always says, play every game like it’s your last, and we saw this season how quickly it can just be taken away from you. You never truly realize how lucky you are to be playing the sport you love until it’s over. So, before it’s too late, put in the extra work. Sprint every sprint like it’s your last. Practice every day like it’s your last practice and play every game like it could be your last game of lacrosse ever.”

Why did you chose Albright/Favorite part about Albright?
“I chose Albright because I fell in love with the coaches, the team, and the atmosphere. I loved the small school feel where you know everybody, and I think this was really beneficial in the classroom because you got to really know your professors as well. I love my teammates, they are and always will be my best friends. We’ll forever be the coolest team on campus, so I loved being a part of that. We also have the best coaches in the MAC so it’s hard not to love Albright!”