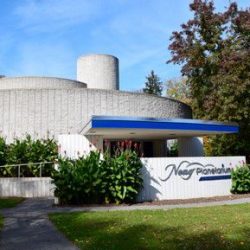 As social distancing measures remain in place and families continue distance learning for children out of school, the Reading Public Museum is releasing another planetarium show online for its “Way Out Wednesday” program, as well as a new at-home science kit for kids.

This week’s kit teach students how to explore their own backyards for the tiniest creatures living there through “Bug-Go” a BINGO-style scavenger hunt game that can be played with family.  Although trips to The Museum’s Arboretum are still being discouraged, once the lock-down ends, this game can also be used to explore the grounds of The Museum in the spirit intended by Dr. Levi Mengel, Founder and first Director of the Reading Public Museum.  Mengel himself was an entomologist and the kit will include information about the science and the man who was inspired by it.  Supplies will be limited and will be distributed until they are exhausted.  Because previous kits were so popular and sold-out before many families were able to take advantage of them, The Museum is asking for a $5 suggested donation for each kit which will help support the development of future educational efforts during this difficult time.    Due to the mandated closure, the Reading Public Museum is experiencing a complete loss of revenues during its busiest season, and contributions via mail or online are always accepted.  Visitors picking up the kits are asked to enter through the Museum Road entrance and remain in their vehicles as kits are distributed and donations are collected.

In addition to the science kit distribution, a new show from the Neag Planetarium will be released on Wednesday, April 29 in flatscreen format, free of charge for visitors to The Museum’s website.  Narrated by Benedict Cumberbatch, “Solar Suerstorms” explores how a fury is building on the surface of the Sun: high-velocity jets, a fiery tsunami wave 100,000 km high, and rising loops of electrified gas. What’s driving these strange phenomena? How will they affect planet Earth? Viewers will find the answers as they venture into the seething interior of our star.  “Solar Superstorms” is a major new production that takes viewers into the tangle of magnetic fields and superhot plasma that vent the Sun’s rage in dramatic flares, violent solar tornadoes, and the largest eruptions in the Solar System: coronal mass ejections.

The show features one of the most intensive efforts ever made to visualize the Sun’s inner workings, including a series of groundbreaking scientific visualizations computed on the giant supercomputing initiative, Blue Waters, based at the National Center for Supercomputing Applications, University of Illinois.

A co-production of Spitz Creative Media, NCSA’s Advanced Visualization Lab, and Thomas Lucas Productions, in association with Fiske Planetarium at the University of Colorado (Boulder), this project has been made possible with support from the Commonwealth of Pennsylvania and the Pennsylvania Film Office; funded in part by the National Science Foundation. Links to the movie will be made available on Wednesday, as will study guides and other materials related to the program, on The Museum’s website at www.ReadingPublicMuseum.org .  Visitors can click on the “Planetarium” link at the top of the page to be directed to hotlinks for “Way Out Wednesday” shows.