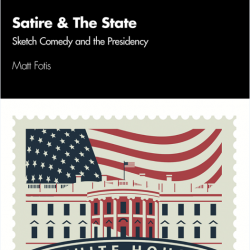 Exploring how sketch comedy has shaped the way Americans view the nation’s president, “Satire & The State” focuses on performance-based satire, most often seen in sketch comedy, from 1960 to the present. The book explores comedic portrayals of presidents such as Nixon, Reagan, the Bushs Clintons, Obama and Trump.

The book also illustrates ways in which presidential sketch comedy has shaped the public persona of political figures – sometimes serving as a populist check on executive power, while other times reflecting racism and homophobia in America.

Although Fotis lists personal favorite sketches as Dana Carvey’s version of George W. Bush and Phil Hartman’s impression of Bill Clinton at McDonald’s, he discussed the story of John F. Kennedy during the book launch. Kennedy famously embraced and capitalized on Vaughn Meader’s comedy album “The First Family,” while other presidents, such as Gerald Ford, fought against satire.

“Satire was really ‘nowhere’ on a national scale when the album came out in 1962,” said Fotis. “A big part of the satiric explosion during Kennedy’s tenure was JFK’s own wit, charm and charisma.”

As associate professor of theatre, Fotis teaches improvisation, acting and writing for performance, and is the author of “Long Form Improvisation and American Comedy: The Harold” (2014), and co-author of “The Comedy Improv Handbook” (2015).