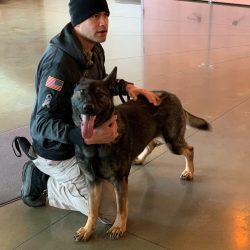 Berks County Community Foundation has awarded $34,700 in grants to support K9 units at three law enforcement agencies in the region.

The grants were issued from two separate funds at the Community Foundation.

Darell S. Rank, the first executive of the Berks Earned Income Tax Bureau, and his wife, Gloria E. (D’Ercole) Rank, understood the importance of safety in their community. Darell Rank had his fair share of courageous moments. For instance, he rescued a woman from a car during the 1972 flooding caused by the remnants of Hurricane Agnes, and he attempted to apprehend a suspect who assaulted a teenage girl. His eyewitness testimony was crucial evidence used for the conviction of the assailant, who was wanted for murder and assault in separate cases. When Gloria died at the age of 79 in 2012, her will left a majority of her estate to Berks County Community Foundation.