ANNVILLE, Pa. ­ Former Albright women’s basketball player Jarra Rusnock Dennis has been selected for induction into the Middle Atlantic Conference Hall of Fame, announced by the conference on May 12. 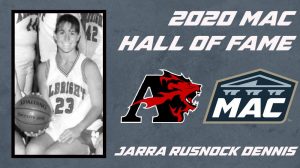 Jarra Rusnock Dennis was a three-sport athlete in basketball, softball and tennis at Albright College earning four varsity letters in each sport. Dennis was a standout basketball player for the Lions as she is a four-time all-conference first-team selection, and was named the MAC Rookie of the Year in 1995. She remains the all-time leading scorer at Albright with 1,642 career points, and holds the program record for career free throws made at 552. In tennis, Dennis finished as the silver medalist in the fall of 1994, as a freshman, and 1996, as a junior, at the women’s tennis individual championships. Dennis was named a CoSIDA First Team Academic All-America in 1998 as a three-sport athlete. At Albright College, she was named an Outstanding Freshman Athlete of the Year and an Outstanding Senior Woman Athlete. She earned team MVP in all three sports she played during her collegiate career. Dennis graduated from Albright in 1998 with a B.S. in chemistry.

Dennis earned her master’s degree from Wilkes University, and serves as a chemistry teacher at Muhlenberg High School. She was named to the Berks County Basketball Hall of Fame in 2019 and to the Albright College Athletics Hall of Fame in 2003.

Dennis is one of 19 individuals that will be inducted into the MAC Hall of Fame. The conference will announce the 2020 class over the next three weeks from May 4-21 (Monday-Friday). The inductees that have been already announced are: Sean Keville (Moravian), Lorraine Maloney (Drew), Ronald Warner (Gettysburg), Chaon Garland (Haverford), Matt Eisenberg (Juniata), and Mike Spangler (Susquehanna).