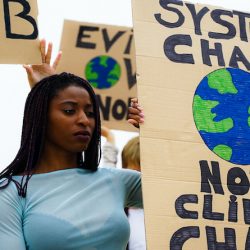 An interfaith group working to slow climate change says there is a link between ending reliance on fossil fuels and the protests taking place across the country.

The COVID-19 pandemic and protests over the police killing of George Floyd, an unarmed African-American man in Minneapolis, have eclipsed many other major news stories. But according to the Rev. Alison Cornish, executive director at Pennsylvania Interfaith Power and Light, the long history of systemic racism sparking nationwide protests is part of the climate crisis, too.

“We know that people with fewer resources and less power and who are more oppressed are going to be people deeply affected by climate,” Cornish said.

She said the challenge is to confront racism and climate change not as separate problems, but as related crisis that must be dealt with as a whole to save the planet and each other.

Cornish said Interfaith Power and Light is composed of people from a wide spectrum of religious beliefs, including evangelicals, Catholics, Protestants, Jews and Muslims

She added the faith community sees climate change as a moral and ethical issue based in their commitment to good stewardship of the earth and its people.

Cornish noted that Interfaith Power and Light began by looking at ways congregations could use energy efficiency and renewable energy to cut their carbon footprints. But the mission has expanded to include advocacy that goes beyond the faith community.

“We help people track the issues at the state and federal level that will help transition us in a just way to a new energy future,” she said.

She said faith communities perform functions that are desperately needed now — helping people to grieve what is being lost, to join in common efforts and to find hope for the future.