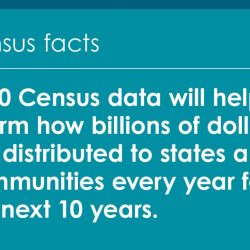 With about 4 in 10 households having yet to respond to the 2020 Census, the U.S. Census Bureau this week announced it is on track to conduct multiple follow-up activities aimed at ensuring a complete and accurate count. Census Bureau staff will conduct the following operations over the next several months:

Coverage Improvement: The Census Bureau began making follow-up calls to some households that have already completed the 2020 Census. The goal is to make sure everyone in a household was counted, and to validate information provided when they completed the census questionnaire. Census call center agents began making calls on April 22. If the household does not answer a call, agents will leave a voicemail with a 12-digit ID as a reference number. This effort is set to continue through the end of the response phase on October 31.

Post-Enumeration Survey: After a household has already completed the 2020 Census, census takers will visit a select number of households as part of the Post-Enumeration Survey. The Census Bureau conducts this survey to measure the coverage of housing units and people residing in housing units in the 2020 Census. To that end, census takers will gather the following information:

The information collected for each person includes name, sex, age, date of birth, race, relationship to householder, and Hispanic origin. The interviewer also collects information about alternate addresses to establish where people lived on Census Day, according to census residence rules. Post-Enumeration Survey interviews are set to take place September 23 to December 22.

The Census Bureau urges the small percentage of households that are contacted during the Nonresponse Followup Reinterview and Post-Enumeration Survey operations to take a few minutes with the census taker to help ensure the quality of the 2020 Census.

All census takers have official ID badges that include their name, photograph, a U.S. Department of Commerce watermark, and an expiration date.

The Census Bureau conducts all operations with two key principles in mind: (1) protecting the health and safety of our staff and the public, and (2) fulfilling our statutory requirement to deliver the 2020 Census counts to the president on schedule. We are working closely with national, state and local health authorities to ensure all of their guidance is incorporated into our operations.

The U.S. Constitution mandates a census of the population every 10 years. Census statistics help determine the number of seats each state holds in the U.S. House of Representatives and how billions of dollars in federal funds will be allocated to states and communities for the next 10 years.

For more information and to complete your Census form today, visit my2020census.gov.