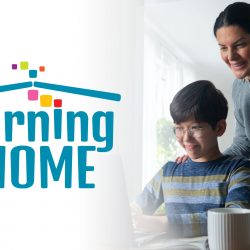 What exactly is datacasting? While broadcasting refers to sending programming “over-the-air” across a geographic region that can be received by an antenna and played on a television, datacasting refers to using those same signals to transmit data to be used on a computer. Pennsylvania PBS will coordinate with educators to create data “instructional units” that are transmitted over television air waves and received by a student’s home computer, without the need to connect to the internet. By supplying an inexpensive receiver, families will be able to download lesson plans, videos, slideshows, worksheets, webpages and more. These instructional materials would then be available on-demand for the student, on the learning schedule that is right for them.

Safety and security are of utmost importance for the datacasting endeavor. The content will be protected in three ways. First, unlike a television broadcast that any TV can pick up, only students with the supplied receivers will be able to access the data “instructional units.” Second, the content will be encrypted and sent over a secured signal, ensuring that no one else can alter the information downloaded by a student. Lastly, children can only access the content that is sent through the datacast, meaning they won’t be able to stumble across inappropriate content like one might with an internet connection.

“Pennsylvania PBS is thrilled to partner with Governor Tom Wolf and the Pennsylvania Department of Education (PDE) to provide a new way for children to receive curriculum materials at home,” said Ron Hetrick, president and CEO at WITF, a member station of Pennsylvania PBS. “Unfortunately, the gaps of broadband internet access continue to be a barrier to many students’ educations while learning at home. Through datacasting, Pennsylvania PBS and its partners will be able to bridge the digital divide, better serving students and families across the Commonwealth.”

The datacasting partnership is one of many of PDE’s initiatives to support schools’ efforts to implement continuity of education plans.

“PDE is dedicated to creating equitable learning environments for students who must learn from home,” said Secretary of Education, Pedro A. Rivera. “Still too many do not have access to broadband internet. We are excited to work with Pennsylvania PBS to bring the classroom to these students at home through datacasting.”

Pennsylvania PBS has a long history of providing educational, yet entertaining, programming for over 50 years. PBS KIDS, a key component of each station’s broadcast schedule, is committed to making a positive impact on the lives of children through curriculum-based entertainment with positive role models and content designed to nurture a child’s total well-being. In a January 2019 Market & Research Resources, Inc. survey, PBS KIDS was ranked the #1 “Children’s Educational Media Brand” with 71% of the votes.

Pennsylvania PBS first partnered with PDE for the Learning at Home initiative after schools closed in response to the spread of the coronavirus.

“When schools closed on March 16, each PBS station knew that it could help to fill a need,” said Kate Domico, executive director of Pennsylvania PBS. “By working with local Intermediate Units, school districts and PDE, each PBS station crafted curriculum schedules aligned with standards, activity ideas and links to additional online resources. By March 30, we launched learningathomepa.org. Pennsylvania PBS is honored to continue to provide free, instructional programming to kindergarten through twelfth grade learners through our Learning at Home initiative.”

Pennsylvania PBS reports that many school districts and teachers implemented the Learning at Home programming this past spring.

“…PBS offers something for every student I teach. Whether they like music, nature, sports, science, or current events, there is a show that is highly entertaining and educational for each and every one of them. I appreciate there is a show or video for almost anything my 8th grade students are interested in,” reported an 8th Grade English Language Arts teacher in Harrisburg, in an email survey.

Pennsylvania PBS will work with the 29 Intermediate Units and school districts across the state to curate the data instructional units. Resources could include thousands of instructional videos and standards-aligned curriculum for all grade levels available for free at PBSLearningMedia.org, teachers’ own lesson plans and recorded lectures.

With the federal funding grant, Pennsylvania PBS will begin implementation of the datacasting pilot program. It expects that students in the first phase of the pilot will begin using datacast instructional units in December 2020.

To find more information about your local PBS station, visit LearningatHomePA.org or: