Limiting how many people can gather indoors and outdoors violates “the right of assembly enshrined in the First Amendment,” a judge ruled. 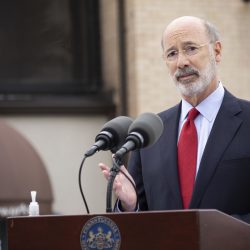 HARRISBURG — Delivering a blow to Gov. Tom Wolf’s strategy for responding to the coronavirus pandemic, a federal judge on Monday ruled that key components of the governor’s mitigation strategy are “unconstitutional,” including the decision to temporarily shut down businesses and limit how many Pennsylvanians can gather in one place.

“The court believes that defendants undertook their actions in a well-intentioned effort to protect Pennsylvanians from the virus,” U.S. District Judge William S. Stickman IV wrote in the 66-page ruling. “But even in an emergency, the authority of government is not unfettered. The liberties protected by the Constitution are not fair-weather freedoms — in place when times are good but able to be cast aside in times of trouble.”

Stickman found that the Wolf administration’s policy limiting indoor and outdoor gatherings and events to 25 and 250 people, respectively, violates “the right of assembly enshrined in the First Amendment.”

The Pittsburgh-based judge also found Wolf and Health Secretary Rachel Levine’s stay-at-home and business closure orders to be unconstitutional. Health experts widely considered temporary shutdowns and limits on business operations to be necessary in order to slow the spread of COVID-19 and keep hospitals from becoming overwhelmed.

The Wolf administration will file an appeal and seek a stay to temporarily block the decision, the Democratic governor’s spokesperson, Lyndsay Kensinger, said. The ruling “is limited to the business closure order and the stay-at-home orders issued in March … as well as the indoor and outdoor gathering limitations.”

Kensinger added that the decision does not apply to other mitigation orders currently in place including one mandating the wearing of masks in public.

During an afternoon press briefing, Levine declined to comment on the suit or its implications.

The decision comes as states across the country are girding for a potential resurgence of the virus in the fall and winter months. Wolf has insisted that every action he and his administration have taken followed recommendations by the nation’s top health experts, even as Republicans who control both legislative chambers have accused him of acting unilaterally and overstepping the bounds of his authority.

The lawsuit that led to Monday’s decision was filed in May by four Western Pennsylvania counties — Butler, Fayette, Green, and Washington — as well as individual businesses and lawmakers against Wolf and Levine.

It targeted, in part, an order Wolf and Levine issued in March shuttering all but “life-sustaining” businesses. Exactly what was deemed life-sustaining and how that decision was made was the center of controversy, and led the administration to create a waiver program that allowed businesses told to close to appeal the decision.

But that program itself became controversial after lawmakers and business owners reported it was unevenly applied within the same industries.

The state has since lifted the stay-at-home orders and allowed businesses to reopen, although some — including restaurants, bars, and salons — are still operating under capacity restrictions. The decision does not apply to limits on how many patrons bars and restaurants can serve indoors.

Republicans in the legislature applauded the decision, including three members of the state House who helped bring the lawsuit. Rep. Tim Bonner (R., Butler) said the ruling “would basically undermine the governor’s ability to continue to rule by edict.”

Washington County Commissioner Nick Sherman, a Republican, called the decision “a huge step in the right direction.” But Sherman cautioned that people should still take wear a mask, practice social distancing, and follow Centers for Disease Control and Prevention guidance.

“This is not opening the flood gates and saying, ‘Let’s flood Heinz Field this Sunday for a Steeler game,’” he said. “There are still precautions that need to take place.”

In ruling against the Wolf administration’s order closing nonessential businesses, Stickman held that its application had been arbitrary and followed no coherent definition of which businesses were “life-sustaining” and which were not.

What’s more, the judge ruled, the administration’s waiver program was applied incoherently and allowed some companies to resume operations even while their competitors in the same industry were denied the same relief.

And while the Wolf administration has argued that the situation is moot as almost all businesses have been allowed to reopen, Stickman noted that the order issued in March had no end date and that state health officials have warned it could be reinstated as necessary at any time, forcing businesses to close again.

“The court recognizes that defendants were acting in haste to address a public health situation,” wrote Stickman, who was nominated to the federal bench in 2019 by President Donald Trump. “But to the extent the defendants were exercising raw governmental authority in a way that could (and did) critically wound or destroy the livelihoods of so many, the people of the commonwealth at least deserved an objective plan.”

Stickman’s decision came two weeks after a federal judge in Philadelphia threw out a similar challenge to the business closure order, saying the restrictions were temporary and, therefore, did not infringe in any permanent way on business owners’ constitutional rights.

His split with Stickman sets the stage for the U.S. Court of Appeals for the Third Circuit to take up the matter should the Wolf administration appeal.

In May, the U.S. Supreme Court declined to get involved in the debate over Pennsylvania’s business closure orders.

Chief Justice John Roberts, in a similar case seeking to block California’s restrictions on religious gatherings, wrote earlier this year that government officials should be granted wide latitude to act in areas “fraught with medical and scientific uncertainties” and should not be “subject to second-guessing by the unelected federal judiciary.”

This story will be updated.