Lawmakers have known about the problems with the rent relief program for months, but Republican leadership failed to bring a fix up for a vote before it expired Thursday. 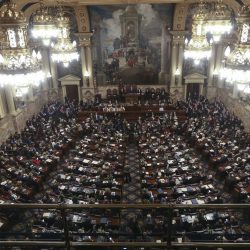 The state House of Representatives canceled its voting session Thursday after a Republican lawmaker tested positive for the coronavirus, delaying a crucial vote to extend a rent relief program that has just expired.
You May Also Like
Facebook Twitter Pinterest Email
Share

HARRISBURG — The state House of Representatives canceled its voting session Thursday after a Republican lawmaker tested positive for the coronavirus, delaying a crucial vote to extend a rent relief program that has just expired.

Speaker Bryan Cutler (R., Lancaster) announced the House will be adjourned until Oct. 19, minutes after Rep. Paul Schemel (R., Franklin) said in a statement that he had tested positive on Thursday morning, after attending a committee meeting in the Capitol on Tuesday.

The news disrupts a last-minute scramble to extend and fix the state’s $150 million rent relief program, which was meant to help Pennsylvanians struggling to pay rent during the pandemic but has been riddled with problems since it launched in July.

For now, the program is in limbo.

“It’s not good,” said Phyllis Chamberlain, executive director of the Housing Alliance of Pennsylvania, an advocacy group. “The program is not going to help all the people it was intended to help because these changes weren’t made earlier.”

The House adjournment also puts several election-related measures on hold, as well, with just over 30 days to go until Nov. 3. That includes a controversial resolution from House Republicans to create and control an “election integrity” panel with subpoena power. Democrats on Wednesday decried the effort as a “stealth attack” on the voting process.

Lawmakers have known about the problems with the rent relief program for months. Both landlord and tenant groups — as well as the Pennsylvania Housing Finance Agency, which is overseeing the program, and Gov. Tom Wolf — have been urging changes since the summer.

But despite the urgent need, and the fast-approaching Sept. 30 deadline for people to apply, GOP leadership didn’t schedule a vote before October.

Thursday’s voting session was canceled “out of an abundance of caution,” Cutler said in a statement. “The member is working with human resources to determine all interactions with other members and staff to track any possible exposures.”

While the House is not scheduled to return until Oct. 19, the speaker and majority leader could recall lawmakers before then.

In the meantime, local organizations administering the rent relief program in each county can still work on applications that have already been submitted, and many have large backlogs. But until lawmakers act, these organizations cannot accept any new applications, and important changes needed to make the program more effective will remain on hold.

“I’m sick over that bill, I could cry,” said Rep. Sue Helm (R., Dauphin), the bill’s sponsor and chair of the House Urban Affairs Committee.

Helm said she hoped the House would be called back into session before Oct. 19. If not, she said, lawmakers could amend the bill to push the application deadline past October.

“One way or another we’re going to make this work because too many people are affected by this,” she said.

Running out of time

Thousands of families across Pennsylvania are struggling to pay rent amidst the economic crisis caused by the coronavirus. A federal ban on most evictions for non-payment of rent, in place until the end of the year, offers a temporary reprieve. But without some way to catch up on back rent, advocates warn the ban will only postpone an inevitable wave of evictions.

The state rental assistance program stopped taking new applications on Thursday with roughly a third of the $150 million available paid out — a reflection of the obstacles applicants have faced in receiving the aid.

The program, funded with federal CARES Act dollars, was intended to benefit both landlords and renters, allowing property owners to recoup their losses from unpaid rent while helping tenants stay in their homes. But a Spotlight PA review in August found the program has been hamstrung by a cumbersome application process, a $750 cap on the amount of assistance each tenant can receive, and a requirement that landlords waive any remaining rental balance owed.

The local organizations responsible for processing applications say many arrive incomplete, requiring hours of back and forth to track down missing paperwork and confirm that tenants are eligible.

The bill that was scheduled for a vote in the House on Thursday would streamline the application process, increase the amount of assistance each household can receive, and extend the deadline to apply.

But even if the House had voted to approve the changes, the timing would have been tight. The bill would extend the application deadline from Sep. 30 to Oct. 31 and would still require approval from the state Senate. That would leave only a narrow window for the changes to take effect, raising the possibility that the program could end, for a second time, with money left over.

“I don’t know whether it will be enough time,” Bryce Maretzki, director of policy and planning at the Pennsylvania Housing Finance Agency, said before the vote was delayed. “The further into October it takes to get the changes made, the less time we have for new applications and to re-review existing applications.”

Still, the application deadline cannot be pushed back much further without bumping up against the Nov. 30 deadline set in state law for spending Pennsylvania’s CARES funding.

Any money remaining after that date will become grants for county governments, which they could spend on their own rental assistance programs. But all the CARES money Pennsylvania received must be spent by the end of the year or returned to the federal government.

The Pennsylvania Housing Finance Agency first flagged “significant administrative and programmatic challenges” with the rent relief program in a memo shared with legislative leaders in early July, just a few days after applications started coming in.

At the end of August, Wolf wrote to lawmakers warning of “serious defects” with the program, urging fixes “as soon as possible.”

And during a Senate committee hearing in early September, advocates and state officials again raised the same set of concerns and recommended changes. The same day, several Democratic senators introduced a bill to fix the program. But the Republican committee chair, Sen. Joe Pittman (R., Indiana), has not yet scheduled a meeting to vote on the legislation.

“I don’t know why they’re sitting on it, because basically they’re denying assistance to thousands of people across Pennsylvania who certainly could use it,” said Sen. Vincent Hughes (D., Philadelphia), one of the bill’s sponsors.

Given the lack of action in Harrisburg, several counties — including Lancaster and Philadelphia — have increased the amount of assistance tenants can receive by bolstering the money from the state with local CARES funding, increasing the monthly payment each tenant can receive to $1,500.

Citing the failures of the state’s effort, Montgomery County in September created its own rental relief program, which offers more assistance with fewer restrictions and less paperwork.

In York County, the local organization administering the program has used social media, newspaper ads, and billboards to get the word out, and made videos in English and Spanish walking viewers through each step of the application process, said Carl Whitehill, director of marketing and communications at the Community Progress Council.

Even so, many applications arrived incomplete and many landlords have been unwilling to participate, he said. So far, only about a quarter of the funding available has been paid out.

“We know there are a lot more renters that need this assistance,” Whitehill said.