Utility companies — including Sunoco, which is behind the controversial Mariner East pipeline system — have wide authority to keep safety information a secret with little oversight. 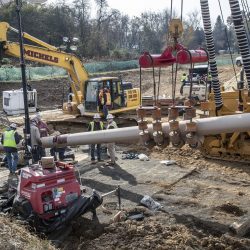 The case centered on Delaware County resident Eric Friedman’s request to the Public Utility Commission for information about the hazards posed by Sunoco’s Mariner East pipeline, a controversial natural gas liquids project spanning the southern half of the state.
You May Also Like
Facebook Twitter Pinterest Email
Share

HARRISBURG — A secrecy law criticized for giving Pennsylvania utility companies nearly unabated power to conceal information got a boost last week after a court ruled the state’s public records office has no power to compel disclosure.

The case centered on Delaware County resident Eric Friedman’s request to the Public Utility Commission for information about the hazards posed by Sunoco’s Mariner East pipeline system, a controversial natural gas liquids project spanning the southern half of the state.

The company and state regulators have refused to release detailed information about the risks posed by the pipelines, including the blast radius, or area of harm should an accident occur, citing the Public Utility Confidential Security Information Disclosure Protection Act.

The law allows utilities and the state to keep “confidential security information” secret if, in a company’s estimation, it might be used for criminal or terrorist acts.

But some residents, emergency planners, and lawmakers contend the law, passed in the wake of the Sept. 11 terrorist attacks, has mushroomed beyond its original intent. They say it can be used by companies to shield large swaths of safety information with little oversight by the state utility commission, which is supposed to oversee what is marked as secret.

Even the commission itself has said it doesn’t have an effective way to track whether documents have been appropriately marked as confidential when they are filed, and only when someone challenges whether information should be sealed does the commission review it.

But given that the material is marked confidential in the first place, it’s hard for the public to even know what’s been kept secret in order to challenge it.

The law precludes local, state, and federal emergency planning agencies from sharing with each other or the public any information marked confidential, even when trying to understand the risk of an accident or make plans for how to keep residents safe. In an active emergency, this information also can’t be shared with other state agencies, the utility commission has said.

The Public Utility Commission in 2019 denied Friedman’s request, citing a litany of exemptions, most notably the confidentiality law. Friedman appealed to the state Office of Open Records, which ordered the commission to release an investigative report related to Mariner East, excluding the blast radius calculations. The commission appealed to Commonwealth Court.

In his ruling, Judge Andrew Crompton — a former top state Senate GOP staffer — found the Office of Open Records had no authority to determine what should and should not be kept secret under the confidentiality law. He ruled that authority rests solely with the utility commission and that there was a separate process to challenge decisions and seek disclosure.

Crompton did not rule on whether the records at issue qualified for confidentiality or not.

“What [the commissioners] are trying to keep secret is what they know about this blast radius and when they knew it,” Friedman said, calling Crompton’s decision to return his request to the same agency that originally denied it “the Kafkaesque, the bureaucratically absurd part.”

Nils Frederiksen-Hagen, a spokesperson for the commission, said the agency is reviewing the court’s decision.

A Spotlight PA investigation published earlier this month found that although state law requires the utility commission to track documents marked as confidential, that oversight is inconsistent. When asked by Spotlight PA how many documents have been deemed secret since the law was enacted, the commission said it would be too burdensome for the agency to find out and would require someone to count the documents by hand.

In one case involving a small leak of the Mariner East pipeline, all technical records — thousands of documents — had been marked confidential by the utility.

At a hearing last August, a former senior staffer for the commission, Paul Metro, said documents marked confidential are filed with the secretary’s bureau, and staff there “aren’t the substantive people to initiate the challenge” if the designation is improper.

Metro said he believed most information was appropriately marked, but even when it’s not, “We’ve got to treat it as [confidential security information] even though whether it truly is CSI may be in question.”

Stretching through 17 south-central Pennsylvania counties, the Mariner East pipeline system spans roughly 350 miles from Ohio, West Virginia, and Southwestern Pennsylvania to a storage and processing facility just outside Philadelphia. The project has been plagued by environmental violations and is highly controversial because of the unique risk of the chemicals flowing through it as well as its proximity to some densely populated areas.

One of the most contentious aspects has been Sunoco and the Public Utility Commission’s refusal to release the blast radius. Based on independent estimates, Spotlight PA’s investigation found as many as 345,000 people live close enough to the Mariner East pipeline system that they could be affected by a leak or serious explosion. Many of those people, however, still don’t know what to do in an emergency.

Comitta said she did not have an immediate reaction to the court’s opinion, but said there should be a balance under the law.

“It is very important to protect infrastructure from terrorist attacks while sharing as much information and dialogue as possible among state and local agencies responsible for public health and safety,” she said.