Tens of thousands of provisional ballots in Pa. still need to be processed

Confusion and anxiety over mail voting caused a wave of 94,000 provisional ballots — required when a voter's eligibility is in question — to be cast on Nov. 3, likely setting a new state record.

A voter studies a provisional ballot while filling it out at Barry Recreation Center, in South Philadelphia, on Election Night 2020. As of Thursday morning, roughly 27,500 had been processed and reported to the state, unofficial results show.
You May Also Like
Facebook Twitter Pinterest Email
Share

This article is made possible through Votebeat, a nonpartisan reporting project covering local election integrity and voting access. This article is available for reprint under the terms of Votebeat’s republishing policy.

HARRISBURG — Tens of thousands of Pennsylvanians are still waiting to see if their vote will be counted as officials continue the tedious process of verifying what is likely to be a record-breaking number of provisional ballots.

Voters whose eligibility was somehow in question Nov. 3 cast 94,000 of these ballots, according to state election officials. As of Thursday morning, roughly 27,500 had been processed and reported to the state, unofficial results show.

Counties were required to report preliminary results to the state by Tuesday, but many have blown the deadline, meaning voters will have to wait longer than the promised seven days to see if their ballots were counted.

Election experts pointed to Pennsylvania’s year-old vote-by-mail system, which some voters and even poll workers didn’t fully understand. In some instances, voters who had requested mail ballots went to vote in person but were wrongly told to cast a provisional ballot. There were also widespread fears and anxieties regarding the U.S. Postal Service and the coronavirus.

One local official said voters treated mail ballots as a back-up plan rather than an equally valid method of casting their vote.

“I think they applied for them as a failsafe, like, ‘If I get COVID, I can still mail my ballot in, or I could still go to the polling place,’” Elk County Elections Director Kimberly Frey said.

It’s unclear when every provisional ballot will be processed and reviewed. A spokesperson for the Department of State did not return emails asking to clarify the matter, but the agency said in a press release that counties are continuing the count.

Some challenges seen on Election Day may not affect Pennsylvania the same way again, as voters and poll workers get more comfortable with voting by mail. But other issues may require policy changes from state lawmakers and county officials, elections experts said.

The uptick in provisional ballots was not a surprise, said Suzanne Almeida, interim executive director of Common Cause Pennsylvania.

“The number of provisional ballots that counties had available was something we kept watching and asking them to increase their numbers to make sure every voter was able to vote,” Almeida said.

Concerns about COVID-19 drove a huge, unforeseen demand for mail ballots. More than 3 million people requested them, and 2.6 million were returned.

Elections officials first experienced a crush of provisional ballots during the June primary. A state review found 42,600 people who requested a mail ballot went to the polls instead and voted provisionally. Lawmakers changed the rules for the general election, allowing voters to bring their mail ballot materials to the polls to be “spoiled” so they could vote through the regular process.

Experts said that change likely prevented an even bigger flood of provisional ballots this November. Still, other issues arose.

“People thought vote-by-mail was just an option you had on the table,” said Bethany Hallam, an Allegheny County Council member and a member of the county’s board of elections.

After the June primary, concerns about the U.S. Postal Service and doubts about voting by mail grew, fueled in part by President Donald Trump’s assaults on the process.

“There was a lot of fear and uncertainty about the mailing system and the whole process of mail-in votes,” Eileen Olmsted, communications director at the League of Women Voters of Pennsylvania, said. “People were confused.”

What’s more, information about how to “spoil” a mail ballot at the polls failed to reach many voters, elections experts said.

Hallam, a Democrat, started a viral campaign to educate voters about “naked ballots” — those without a required secrecy envelope — but said she and others campaigning to turn out voters did not want to encourage them to abandon mail voting out of concern that it would create long lines at the polls.

“We knew that that was going to make the process longer, and we wanted everybody who requested a ballot in the mail to vote that way, because it was the easiest way to do it,” Hallam said. “I don’t think we spent enough time talking about the spoiling of the ballots.”

Erie County Council Member Carl Anderson III, also chair of his county’s board of elections, said candidates and local leaders in both major parties tried to spread that message.

“Unfortunately what ends up happening is people say, ‘Oh yeah I have to go to the polls and vote,’ but then they forget to bring the ballot with them,” Anderson said.

The confusion felt by voters extended to poll workers in some counties.

Hallam said she decided to go through the spoiling process herself so she would know firsthand what the experience was like for her constituents.

When she showed up to her local polling location in Pittsburgh around noon, she said the poll workers there incorrectly told her she would need to cast a provisional ballot. She then proceeded to walk them through the ballot spoiling process herself, she said.

“I know what’s supposed to happen, but the poll workers weren’t trained in that,” Hallam said. The poll workers told Hallam they had been giving provisional ballots to voters with their mail ballots all morning.

Training poll workers was a wider challenge this year because of pandemic restrictions and the fact that so many new volunteers joined the ranks.

“We had thousands and thousands of folks who stepped up to the plate to be a poll worker for the first time,” Patrick Christmas, policy director at the good-government organization Committee of Seventy, said. “They were burdened not only in trying to administer this election during a pandemic, but the process of spoiling the mail-in ballot was brand new to them.” 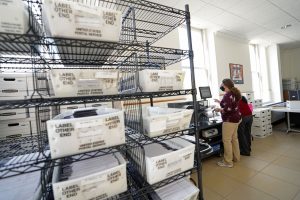 Christmas said the 2019 law that created no-excuse mail voting was a major step forward for Pennsylvania, but the legislature needs to modernize other parts of the Election Code.

One helpful change would be to simplify how counties assign poll workers, Christmas said. There are antiquated rules that make it harder for elections officials to definitively assign volunteers far in advance, he said.

Ray Murphy — a state coordinator at Keystone Votes, a nonpartisan coalition of voting rights groups and community organizations — said the state should adopt a more exact mail tracking system common with commercial packages. Pennsylvania’s system allowed voters to look up the status of their ballots on a website, but several states offered more user-friendly services that notified voters about their ballots’ progress. That would go a long way in alleviating voters’ anxieties about whether their ballot got lost, he said.

That peace of mind could prevent voters from casting a provisional ballot out of fear that they did not handle their mail ballot correctly, something Murphy said he almost did himself on Election Day.

Murphy said officials in states that implemented better ballot tracking software told him the number of voter calls to elections offices declined by as much as 80%, Murphy said. Busy phone lines at elections offices likely added to voter confusion and the high level of provisional voting, he said.

The delays in counting provisional ballots could also be cured through something called pre-canvassing. Because of a contentious disagreement between Gov. Tom Wolf and the GOP-led legislature, counties were only able to start processing mail ballots on Nov. 3.

That restriction delayed everything, Anderson of Erie County said. “Expanding the pre-canvass period pretty much solves everything else we’re talking about.”

Anderson said with an earlier pre-canvassing period, the county would have finished counting mail ballots by election night, allowing them to start counting provisional ballots the next day.

“We would’ve been done by the weekend,” Anderson said.