Suppression testing would require the state to increase daily testing nearly four times over, but that’s the only way to use it as a tool to actually slow down the virus. 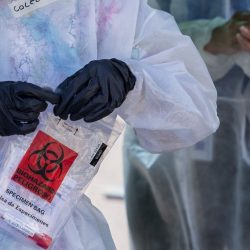 HARRISBURG — Pennsylvania has greatly increased the amount of daily coronavirus testing it conducts since the pandemic began this spring, but still falls short of many states and lags far behind what some experts say is needed to actually suppress the spread.

Over the past week, the state has reported an average of 17,859 new PCR test results per day — or roughly 143 tests per 100,000 people, according to Spotlight PA’s coronavirus tracker.

That’s less than all but four states and Puerto Rico, according to Johns Hopkins University’s testing tracker.

The state Department of Health presents a different number that includes antigen tests, which detect specific proteins of COVID-19 and can produce results in less than an hour. From Dec. 16 through Dec. 22, the agency said it received 490,592 results. That breaks down to roughly 560 results daily per 100,000 people.

But even using that metric, the state falls well short of what would be needed to actually slow down the virus, and some experts said Pennsylvania should adopt a new, more aggressive target to ramp up capacity.

A “suppression” target, or using testing to catch outbreaks before they happen, would require the state to immensely increase the number of new people tested daily, according to a tool designed by the Brown University School of Public Health and the Harvard Global Health Institute.

As of Oct. 1, the state would have needed to conduct 1,951 daily tests per 100,000 people. The school has not reset targets since then, and in the intervening months, the number of cases has exploded in the state — with daily totals regularly topping 10,000.

And while that number of daily tests is much higher than the current reality in Pennsylvania, it’s not unachievable. According to Brown researchers, a handful of states and the District of Columbia currently meet or exceed the suppression standard, including New York.

Dr. Thomas Tsai, a physician at Brigham and Women’s Hospital and assistant professor at Harvard T.H. Chan School of Public Health, said suppression-level testing works beyond simply tracing the disease to provide the data needed to actually slow it down.

“A suppression level of testing creates the opportunity to have a strategy focused on asymptomatic screening to break the chain of silent transmission,” Tsai said. “A suppression strategy built on wide-scale testing including screening of high-risk asymptomatic individuals moves the strategy from just treading water to swimming towards shore.”

In October, PennPIRG, a public interest advocacy group, launched its “Home Safe for the Holidays” initiative, urging the Wolf administration to adopt the suppression target and a number of measures. That includes mobilizing a local network of labs to increase testing capacity, expanding the number and variety of testing locations, and launching a state-sponsored education campaign that focuses on where, when, and how residents can get a test.

“Right now, not only are we heading in the wrong direction on COVID, in many states across the country, and including in Pennsylvania, but we still are far behind on our testing capacity, which is one of the most important things that we can do to suppress this virus and get back to some semblance of normalcy,” said Matthew Wellington, public health campaigns director for U.S. PIRG and U.S. PIRG Education Fund.

Despite the significant gap between Pennsylvania’s daily test numbers and Brown’s suppression target, department spokesperson Nate Wardle described the state’s testing capacity as “robust,” but did not specify if the target is attainable.

“In some parts of the state, where there are not as many sources of testing, there may be some volume issues, but overall if someone needs to be tested, they can get tested,” he said.

Since the beginning of the pandemic, the state has substantially expanded its testing capacity. The Department of Health partnered with companies such as CVS, Rite Aid, and Walmart to increase testing availability. There are now more than 900 COVID-19 testing locations in the state, with additional pop-up testing in areas with high case numbers.

Most locations offer PCR testing, which, according to Michael Huff, director of testing and contact tracing for the state health department, is considered the “golden standard” for testing because it detects genetic material of the coronavirus, giving individuals more accurate results.

But the state is trying to supplement its capacity through rapid antigen tests, which have a faster turnaround time than PCR tests but are prone to more false negatives and false positives.

Through the end of December, the state planned to distribute more than 3.8 million rapid tests allocated by the federal government to “protect vulnerable populations in Pennsylvania counties demonstrating substantial risk for community spread, prioritizing counties with current outbreaks,” a November press release from the Department of Health said.

“The commonwealth will continue to review where the greatest need for testing is and leverage mobile testing capabilities when possible to ensure flexibility in the testing response,” Huff said at the time.

But even with the increased capacity, the state’s plan still primarily targets areas with existing outbreaks, rather than trying to prevent them. While asymptomatic individuals who have been in close contact with a person who tested positive are prioritized in the second tier of the state’s plan, “many” testing sites are only testing symptomatic individuals due to the high number of cases, Wardle said.

Dr. Stefanie Friedhoff — senior director of content, strategy, and public affairs at the Brown School of Public Health — said states that are successfully suppressing the virus are using testing as a strategy, not just as an intervention when there are outbreaks.

“It’s really both community-based approaches and, again, getting everyone on board with mask-wearing and everything else,” Friedhoff said. “So, when you have these outbreaks the whole community comes together to fight them.”

The Brown University School of Public Health and Harvard Global Health Institute determined the testing targets, in early iterations, with data collected from a model created by data scientist Youyang Gu, creator of COVID-19 Projections. The model collects data from past coronavirus cases nationwide, death reports, hospitalizations, and even past flu outbreaks to predict the path of the pandemic, including future infections.

The team then used this data to estimate how many people would need to be tested based on the projected rate of infections. While there are ongoing issues with how states collect data on COVID-19, the numbers can indicate if states are moving in the right direction.

Those states meeting the suppression targets can offer blueprints for how Pennsylvania could improve, Wellington said. In New York, for example, officials have implemented mobile testing units.

“Mobile testing units can help target high-risk settings like houses of worship, nursing homes, and meatpacking facilities where we know the virus can spread rapidly,” he said.

Pennsylvania in December launched pop-up drive-thru and indoor walk-in clinics to target areas with rapid increases. There are also five coronavirus testing “strike teams” operating in the 61 counties that lack their own health department.

During a news conference on Dec. 22, Huff, the state’s director of testing and contract tracing, said the newly passed federal coronavirus aid bill will provide $22 billion to states for testing, contact tracing, and other mitigation efforts.

He said Pennsylvania will use the money to ramp up the state’s surveillance testing on college campuses and other congregate settings. This would include randomly selected testing of asymptomatic individuals in a community. Some institutions, such as Penn State, have already implemented this type of testing on campus and will continue it for the spring semester.