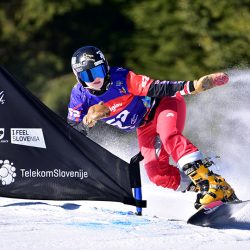 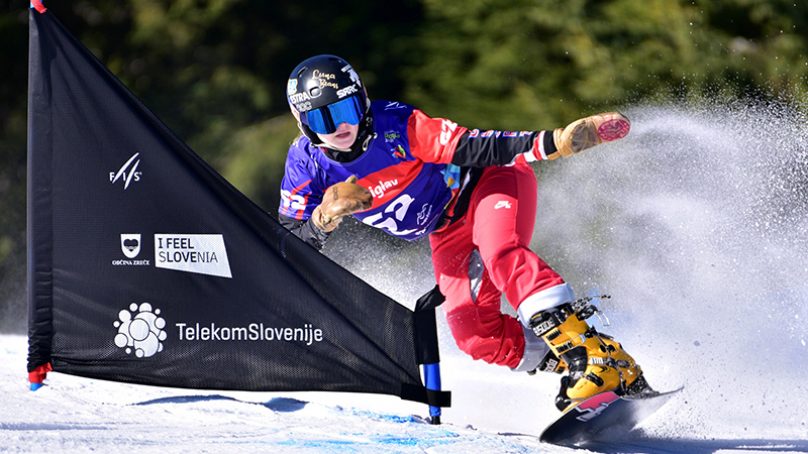 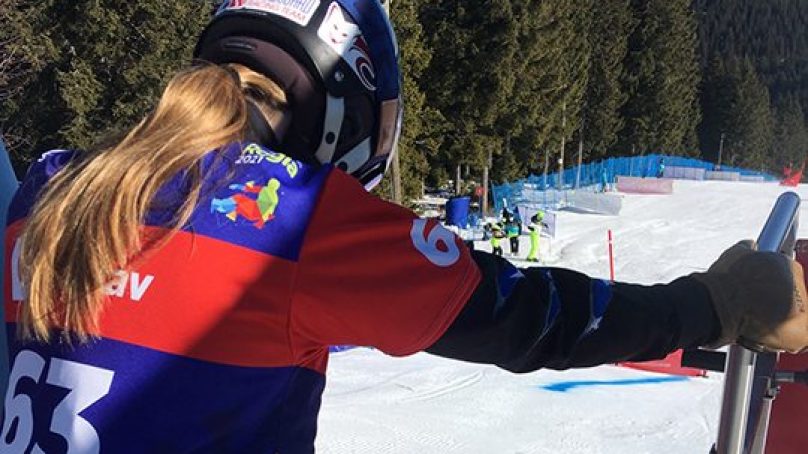 Although the recent 2021 FIS Snowboard World Championship in Rogla, Slovenia took place during a global pandemic, Penn State Berks junior Kaiya Kizuka emerged victorious as the second top American female and the fastest American female in the red course in the Giant Slalom event. She took third place among American female snowboarders in the Parallel Slalom.

Kizuka sees that experience as an important step toward her future dreams of Olympic competition. “The best part was just being able to compete with the snowboarders I have watched on TV, like Ramona Theresia Hofmeister, who took second place at the 2021 World Championships for Parallel Slalom, and Benjamin Karl, who won the Parallel Slalom event in the 2021 World Championships. It was a great experience to compete at that level in a non-Olympic year,” comments Kizuka, who has been snowboarding since she was five-year-old.

She almost didn’t have the opportunity to compete because officials would not accept her U.S. COVID-19 test when she arrived in Slovenia. Fortunately, she was able to get tested again at the competition. However, due to strict COVID quarantine regulations, she missed the first day of training, adding to an already shortened season of practice.

A junior mechanical engineering major at Penn State Berks, Kizuka juggles an aggressive training schedule, her studies at the college, working multiple jobs, injury rehab, and competitions to stay at the top of her sport. Despite all her commitments, she has earned a spot on the Dean’s List at Penn State Berks.

“I’m really fortunate that all my professors have been very flexible with me,” she explains. “The most important thing is to maintain open communication with my professors, so I know what their expectations are.”

She adds that she is accustomed to taking courses online. “I have done hybrid schooling since my sophomore year of high school to keep up with my studies while I travel and compete.”

This was the second time Kizuka represented the United States at the FIS Snowboard World Championships in the past three years. She just returned from Steamboat, Colorado where she won gold in Women’s Snowboard Parallel Giant Slalom and silver in the Parallel Slalom.

Her first race experience was through the NASTAR race program. After a year of racing on those courses, which were set for ski racing, she moved on to the USASA Mid-Atlantic Snowboard Series. At the age of 15, she began competing in the open class level at national and international FIS events, where she went up against professional and Olympic snowboarders from around the world.

When asked why she chose Penn State Berks, she explains that she was approached by Dr. Rungun Nathan, associate professor of engineering and program chair of the mechanical engineering degree program, while she was a student at RACC. He asked her why she wasn’t in his program, and she responded that RACC was flexible with her competition travel. Nathan promised to work with her if she came to Berks, and he has kept that promise.

“That was a big driving factor of why I’m here now,” states Kizuka.

She adds, “I’ve had an opportunity to do industry-specific work in the mechanical engineering program at Penn State Berks. Currently I’m working with other students at the college to develop an easy-to-use dog leash for people with mobility issues.” The project is part of the college’s Pfreimer Adaptive Equipment Project (PADEP) in which students majoring in electro-mechanical engineering technology, mechanical engineering, occupational therapy and business collaborate to create devices to meet the needs of individuals with physical challenges.

After graduation in May 2022, Kizuki plans to travel to Europe to begin training for the 2026 Olympics. “The U.S. doesn’t have a national snowboarding team, so I will need to find an independent coach.”

She also plans to put her mechanical engineering degree to work in the auto sport racing industry – Formula One to be specific. She adds that she is a member Penn State Berks’ Society of Automotive Engineers (SAE) Baja Club, and University Park’s Formula SAE Club.