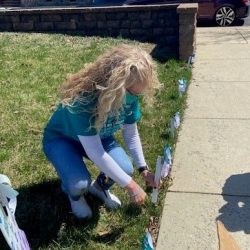 Each pinwheel is inscribed with the Safe Berks logo, and inspiring messages including, “There is Hope,” and “You are Not Alone.” There were also signs with the message, “Prevention Begins with Awareness.”

According to the Rape, Abuse, and Incest National Network (RAINN), 1 in 3 women and 1 in 6 men will be the victim of a sexual assault in their lifetime. There is an average of 293,066 individuals ages 12 or older who are victims of sexual assault each year in the United States. This means a sexual assault occurs every 98 seconds in this country. However, most sexual assaults are not reported to police, with only an estimated 230 out of every 1,000 reported.

“We know that the majority of victims of sexual assault do not report these crimes to police,” said Lisa Tumbleson, Director of Education and Outreach at Safe Berks. “At this event, we recognized and remembered all victims of sexual assault, known and unknown. We also want to reach out to victims and let them know that Safe Berks is here to help them when they are ready.”

Tumbleson said the pinwheels are a sign of hope.

“A pinwheel is such a simple thing, and for many people, brings back happy memories of childhood,” said Tumbleson. “There is also something calming and meditative about watching a pinwheel spin. We are hoping survivors of sexual assault will hear a message that strikes a note with them. And that they will take time to breathe, and time to heal. We want them to know that they are not alone and that there are people available to listen and to help.” 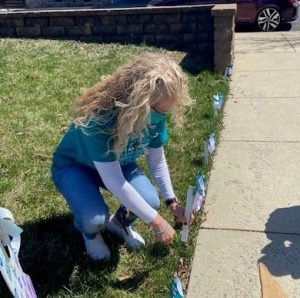 Following the planting of the pinwheels, Safe Berks staff and advocates participated in a “Lunch & Learn,” including watching the film, The Rape of Recy Taylor. Recy Taylor, a 24-year-old black mother and sharecropper, was gang raped by six white boys in 1944 in Alabama. The NAACP sent its chief investigator, Rosa Parks, who rallied support and created a historic outcry for justice.

Throughout the month of April, the Safe Berks Education and Outreach Department will provide additional training opportunities to Safe Berks staff and other care providers throughout Pennsylvania. Safe Berks staff have created educational webinars on the following topics: Sexual Assault 101; Digital Consent; Sexual Assault Issues in the LGBTQ+ Community; and Sexual Assault Issues in the Hispanic Community. These webinars, which have been created in both English and Spanish, will air on the Safe Berks Facebook page, as well as the Pennsylvania Coalition Against Rape (PCAR) Facebook page.

Safe Berks services are free, confidential and available 24 hours a day, 365 days a year. Services are available in English and Spanish and will be translated into any other language needed. The Safe Berks 24-hour hotline is 844-789-SAFE (7233) or text the words SAFE BERKS to 20121.