Moms, Work and the Pandemic 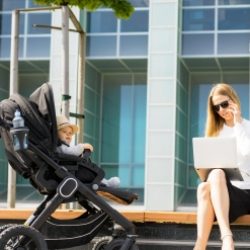 Around 10 million U.S. mothers living with their own school-age children were not actively working in January — 1.4 million more than during the same month last year, according to new U.S. Census Bureau data.

The pandemic has had a devastating effect on employment overall but especially on mothers’ paid labor. The 10 million not working accounted for over one-third of all mothers living with school-age children in the United States, according to the Current Population Survey. 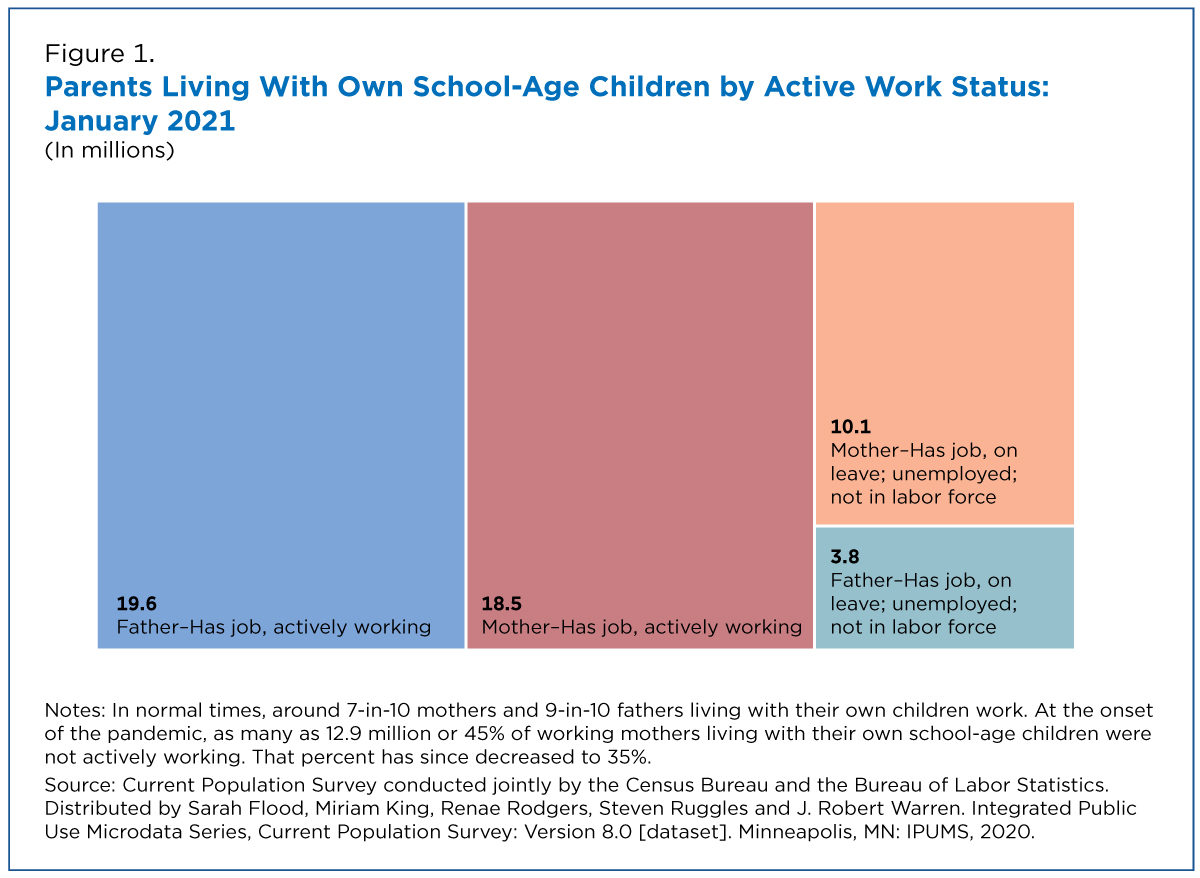 How Did We Get Here?

Last spring, between March and April, some 3.5 million mothers living with school-age children left active work — either shifting into paid or unpaid leave, losing their job, or exiting the labor market all together.

Almost 1-in-2 (45%) mothers of school-age children were not actively working last April.

The school year began in earnest months ago but deep into the academic year, school systems are still trying to figure out how and when to return to in-person classes.

Some have found ways to juggle work, child care and virtual schooling. By January 2021, more than 18.5 million mothers living with their own school-age children were actively working — still 1.6 million fewer than in January 2020 (Figure 2). 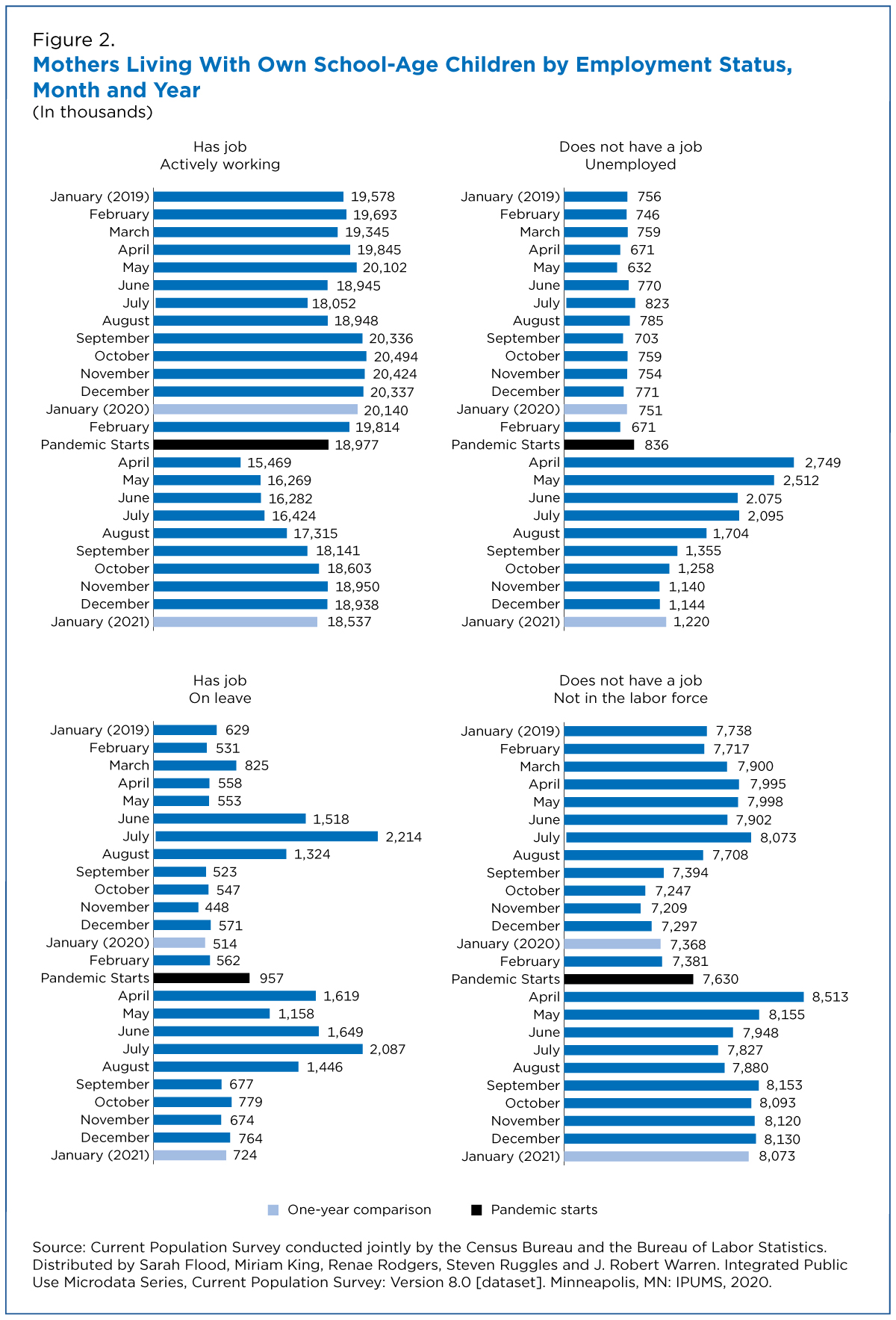 While the recovery has stalled, employment of mothers has all but caught up to fathers in term of pre-pandemic patterns. 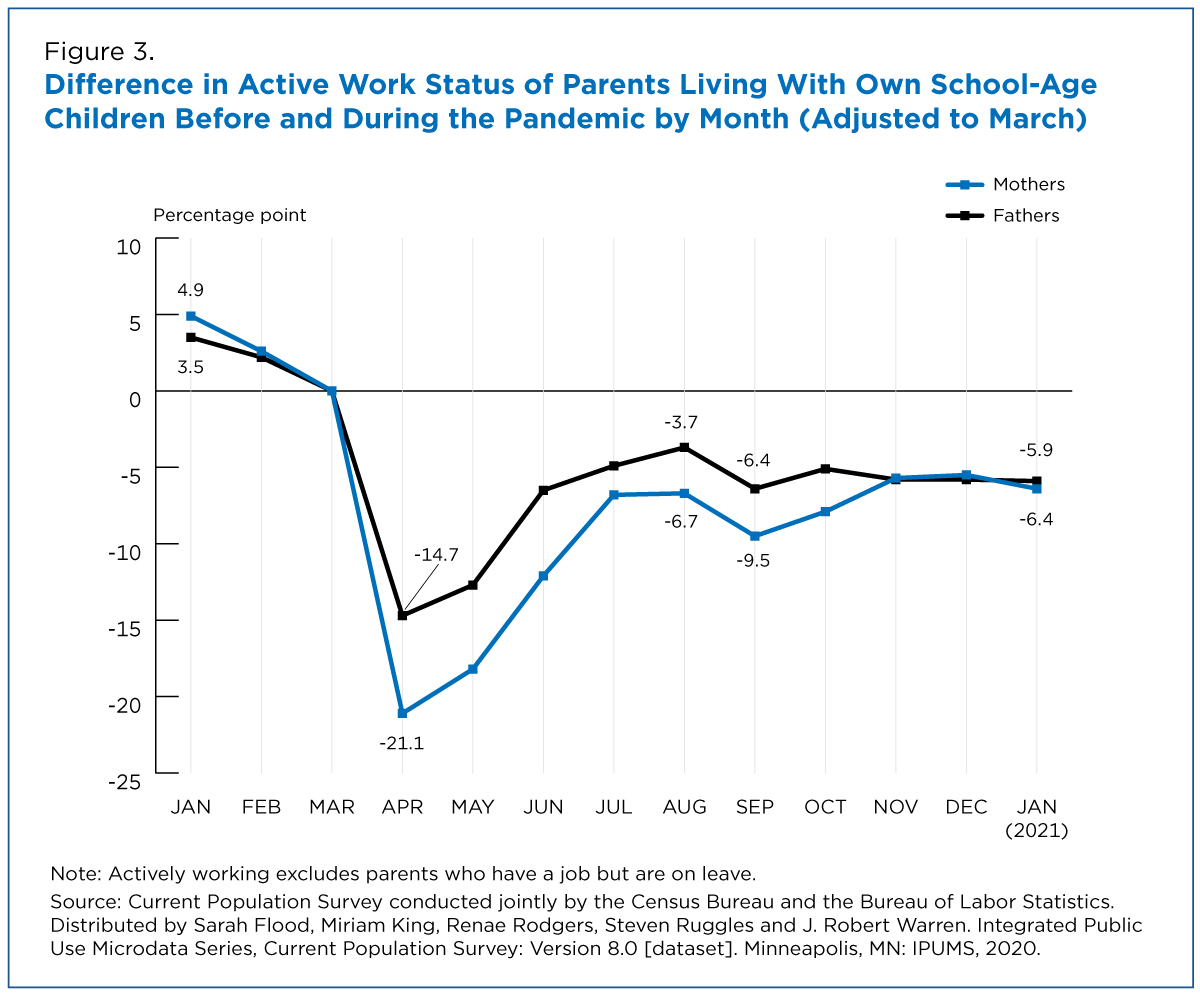 Media reports say moms have been hit harder than fathers. But are they true?

In a word, yes — at least initially, according to U.S. Census Bureau data.

At the onset of the pandemic, the share of mothers actively working decreased more than fathers. Mothers declined 21.1 percentage points while the share of fathers dropped 14.7 points in April 2020 compared to the previous month and to the same month the previous year (Figure 3).

The two most cited reasons are:

V-shaped employment patterns are not new for mothers.

Their work patterns went through similar down-and-up cycles even before the pandemic. Many take leave or stop work during the summer months and take interim breaks when children are not in school every year (Figure 2).

However, this V-shaped pattern is just one symptom of a larger issue: gender inequality in the workplace. It speaks not only to whether someone is working but also to issues related to promotion, advancement, and earnings.

The pandemic has made this V-shape cycle even more stark and prolonged, threatening efforts to narrow the gender gap. And while many mothers often take leave in summer months, the pandemic forced many in 2020 to take leave earlier in the year and into the fall (Figure 2), most likely exhausting the paid or unpaid leave available to them.

Even in January 2021, an additional 210,000 mothers were on paid or unpaid leave compared to the same month the prior year.

Similar to the pattern for all workers, unemployment spiked for mothers in the spring, increasing by more than threefold its pre-pandemic rate (Figure 2).

Despite that decline, there were some 1.2 million more mothers unemployed compared to the same month the previous year, when mothers’ unemployment rate was just 3.5%.

Many moms have given up and left the workforce (Figure 2) since the pandemic hit: nearly three-quarters of a million (705,000)  more have given up on work outside the home entirely and some may  not return.

Those who do resume work may experience decreased total lifetime earnings due to dropping out or being forced out during the pandemic.

Mothers Living Alone or With Other Working-Age Adults

Mothers who live in households where other adults contribute a substantial portion of the household earnings may not feel compelled to return to work. Instead, they may focus on taking care of the needs of their school-age children during the pandemic, many of whom are attending school virtually.

Many children who have gone back to school often only attend in person two or three days a week. Even if they are back fulltime, one case of COVID-19 in a classroom can shutter it for a week at a time. These challenges make it difficult for mothers to hold a steady job, especially one that does not allow remote work.

From an economic perspective, mothers of school-age children who have the option may exit the labor market for now.

Those who live alone or can’t rely on income of other adults in the household may continue to work (if work is available) — even if that means working outside of their home (non-telework jobs) and leaving children home alone.

Living with another working-age adult (age 18-64) does not seem to have spared mothers from doing double duty: Working for pay and working for no pay taking care of children and housekeeping.

While mothers are less likely to work overall if they live with other working-age adults, those who were working stayed working (Figure 4, Column 2).

The experiences of working mothers vary by race and ethnicity. The reasons are complex and depend on various factors, including occupations and jobs or having at least one other working-age adult in the home.

Overall, mothers across all race and ethnic groups faced challenges in the labor market but non-white single mothers were hit hardest.

Black, non-Hispanic mothers not living with any other working-age adult left or lost jobs at a rate 7.5 percentage points higher in January 2021 than in January 2020 (Figure 4).

White, non-Hispanic and Hispanic mothers were more likely to have dropped out of the workforce if there was no other working-age adult in the household.

In January 2021, the percent of mothers unemployed was higher for those who did not live with a working-age adult compared to moms who did.

Percentage of unemployed single mothers by race and ethnicity:

Working mothers are either willingly leaving jobs or are being forced out in extraordinary numbers. Mothers’ V-shaped employment patterns are becoming prolonged and more severe in this global crisis.

Many women left lower-paying jobs in retail or service sectors that they may be able to reenter as the economy rebounds (Figure 5).

But, many others in professional, educational, and health jobs have also left the labor force. For any of these mothers, leaving even temporarily for childbirth or during the pandemic to care for children reduces not only their earnings today but their potential earnings tomorrow and into the future.

As the pandemic drags on, these negative effects on the total lifetime earnings of mothers of school age children will increase. This, in turn, may exacerbate gender inequalities in the workforce. 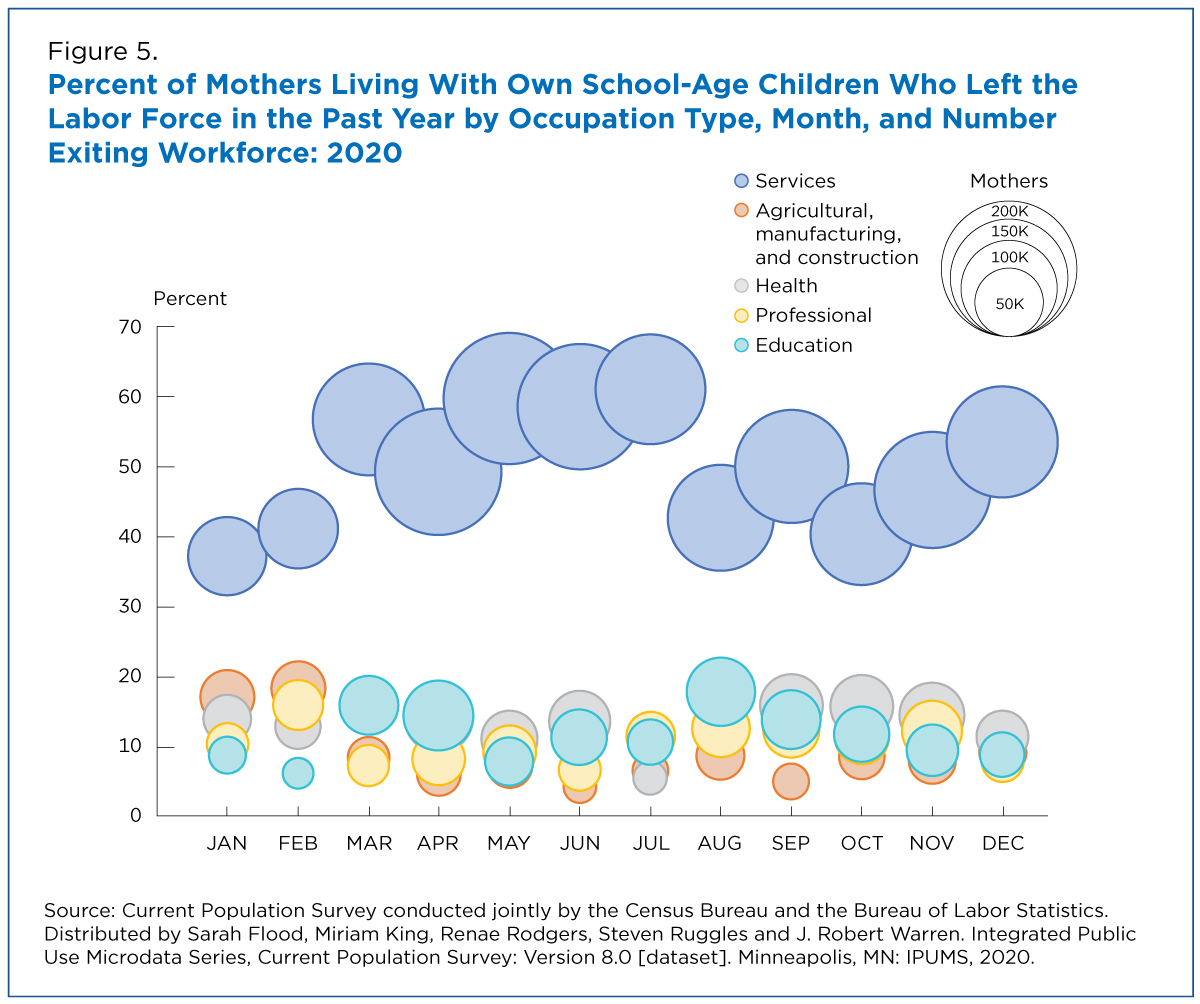 Misty L. Heggeness is a senior advisor and principal economist at the U.S. Census Bureau

Jason Fields is a senior researcher for demographic programs at the U.S. Census Bureau

Yazmin A. García Trejo is a social science researcher at the U.S. Census Bureau

Anthony Schulzetenberg is a research psychologist at the U.S. Census Bureau