Pagoda Pacers, IM ABLE Team Up to Share The Thrill Of Racing 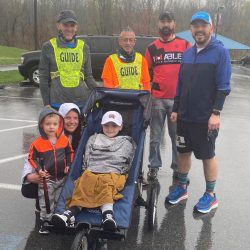 Brantlee Phillips was in a car accident at five years old. The spinal cord injury he sustained means that he may never walk again. But this weekend, thanks to the Pagoda Pacers and the IM ABLE Foundation, he was able to experience the joy of running in a 5K.

Brantlee was pushed by three runners, Dale Wiest, Evan Falk, and Michael Whalen, in an adaptive pushing jogger and felt the joy of crossing the finish line for the first time in his young life. “He has been smiling and talking about the experience non-stop with people,” said his mother, Leann Wheeland. “He wore his medals to school [Monday] to show off to his friends. He says the speed bumps were his favorite and he felt really special and famous with everyone cheering him on. He says he wants to keep doing the races, even if it’s in the rain again.”

Berks County has a remarkable running community evidenced by one of the largest running clubs in Pennsylvania. The Pagoda Pacers have been logging miles on the roads and trails of Berks County since the 1980s and have grown to now have more than 450 members.

One of the Pacers, Dale Wiest, has been running his whole life. As he was approaching his retirement in March of 2020, he was looking for a way to share his passion and the thrill of racing with others. He reached out to the IM ABLE Foundation to start a conversation about pushing a child with a challenge in a race using one of the Foundation’s jogging strollers.

Over the next few months, Wiest scouted race routes, coordinated with race directors on the logistics, and laid the groundwork for what would a new program, Race Mates. Shortly after he retired, and days before the first of many planned races, the Covid-19 pandemic forced one race cancellation after the next.

This past Sunday, Race Mates was finally able to hold its first event at the Pagoda Pacer’s final “Shiver by the River” race series held in Jim Dietrich Park in Muhlenberg. With an official time of 26:55, Brantlee crossed the finish line a few seconds before Dale, Evan, and Michael.

Sue Jackson, the Race Director, said, “I’m very glad that we are able to help with this endeavor and hopefully it is the beginning of many more races.”

For more information or to support IM ABLE’s mission to provide opportunities for people with physical, behavioral, and/or cognitive challenges, please go to https://imablefoundation.org.