by Library of Congress 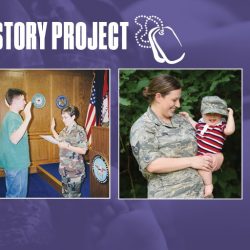 Mothers have volunteered to serve in the military since the Revolutionary War, where they held traditional roles as nurses, seamstresses or cooks and, since 2015, in designated frontline combat roles. On Thursday, May 6 at 12 p.m. EST, the Library of Congress Veterans History Project (VHP) invites the public to a virtual panel titled “Motherhood and the Military” through the VHP Facebook page. The panelists and moderator will be available to answer questions and address remarks in the comments section.

Women were 16.5% of all active-duty personnel in 2018 and make up 10% of all military veterans, a percentage that is likely to increase rapidly in the next decade, according to Pentagon data. Women veterans hold many roles, including that of mothers, but their contributions have often gone unrecognized, according to experts.

Ahead of Mother’s Day, the panel will explore the intersection of the role of mothers and their connection to the military through the personal experiences of four women veterans.

“These strong women, just like those who came before them, remind us that while motherhood itself can be a full-time job, some mothers choose to continue serving in the Armed Forces. They juggle the trials of parenting with the responsibility of maintaining operations, coping with deployment and the uncertainty that can come with it all,” said Elizabeth Estabrooks, acting executive director of the U.S. Department of Veterans Affairs Center for Women Veterans, and the panel’s moderator.

The discussion will include special introductions by Senators Tammy Duckworth, D-Ill, and Joni Ernst, R-Iowa, both of whom are military veterans and mothers and serve on the Senate Armed Services Committee. Duckworth, an Iraq war veteran, is the first female double amputee to serve in the Senate, while Ernst was the first female combat veteran to serve in that chamber.

“The dual roles of mother and soldier are not uncommon, but too often the story of service, sacrifice and the impact on individual families goes untold,” said Duckworth, who made history in 2018 when she took her newborn baby to a Senate floor vote, just weeks after giving birth.

For her part, Ernst, a former company commander in Kuwait and Iraq, said it wasn’t easy for her to leave her little girl for deployments “halfway across the world.”

“That experience left me with a deep appreciation for the sacrifice our military families make, particularly our moms in uniform,” said Ernst, the first woman to represent Iowa in Congress.

The panel will feature mothers from different military branches who have served our nation through various generations and armed conflicts. They will discuss the trials of parenting and fulfilling operational obligations, coping with the heartache of deployments and separations and the uncertainty that comes with military service.

Panelists for the program include:

Congress created the Veterans History Project in 2000 to collect, preserve and make accessible the firsthand remembrances of United States war veterans from World War I through the more recent conflicts in Iraq and Afghanistan, so that future generations may hear directly from veterans and better understand the realities of military service. For more information, visit www.loc.gov/vets/ or call the toll-free message line at (888) 371-5848. Subscribe to the VHP RSS to receive periodic updates of VHP news. Follow VHP on Facebook @vetshistoryproject.

The Library of Congress is the world’s largest library, offering access to the creative record of the United States — and extensive materials from around the world — both on-site and online. It is the main research arm of the U.S. Congress and the home of the U.S. Copyright Office. Explore collections, reference services, and other programs and plan a visit at loc.gov; access the official site for U.S. federal legislative information at congress.gov; and register creative works of authorship at copyright.gov.