5 issues Pa. lawmakers will face when they return from summer break 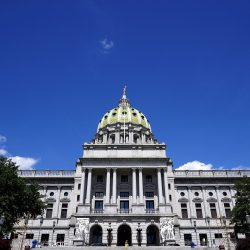 HARRISBURG — Pennsylvania’s General Assembly is headed into a long summer recess after a flurry of legislative activity. But several key issues remain unresolved and will have to wait until lawmakers reconvene in the fall.

Democrats have indicated they want to see more government spending to address economic fallout from the pandemic. Republicans who control both legislative chambers hope to focus on election reform and facilitating economic growth by extending pandemic regulatory waivers and spending federal dollars prudently.

Here are the issues to watch.

The measure included more stringent voter ID requirements, earlier deadlines to apply for a mail ballot, and a plan to introduce early voting by 2025.

Republicans are expected to resurrect the issue upon their return. Jason Thompson, spokesperson for Senate President Pro Tempore Jake Corman (R., Centre), said that election reform will be “one of our top priorities” when the legislature reconvenes.

Sen. David Argall (R., Schuykill) introduced a bill in June that would give counties the ability to begin processing mail ballots before Election Day and move up the deadline to apply for a mail ballot. The bipartisan County Commissioners Association of Pennsylvania has lobbied for these reforms, arguing that they are needed to avoid delays in reporting results — an issue they faced in the November 2020 election.

With Wolf’s veto, Republican lawmakers this fall may consider standalone bills with a better chance of winning the governor’s signature while also pursuing a route that takes more controversial issues directly to the voters.

Earlier this week, a key Republican — Rep. Seth Grove of York County — voiced his support for bypassing Wolf and expanding voter ID in Pennsylvania through a constitutional amendment. A resolution passed the state Senate in June and was sent to the House for consideration.

The General Assembly must approve the measure in two consecutive two-year sessions to send the question to the voters. The earliest the question could appear on the ballot is 2023.

$5B in federal relief dollars

“Whatever legislative process we need to go through to get this money towards people the way that it was intended, that’s what we’re gonna do,” Crampsie said.

But Democrats are certain to run into Republican resistance.

GOP lawmakers are wary of spending the federal money too quickly, pointing to a budget shortfall more than a decade ago after Pennsylvania used one-time stimulus dollars to increase basic education funding. If the state uses relief money to increase funding for a program or create a new one, lawmakers will eventually have to find another source of revenue — perhaps necessitating a tax hike.

“Despite what Democrats have been saying, when you start a program, you can almost never get rid of it,” House Republican spokesperson Jason Gottesman said. “Our main priority was to use that money … prudently over the long term to ensure that we’re not going back to taxpayers to continue funding programs.”

To boost Pennsylvania’s economic recovery, Republicans would rather consider extending some regulatory waivers. Before lawmakers voted to end Wolf’s pandemic emergency declaration in June, the legislature extended many of the order’s regulatory waivers until September. Those waivers relaxed state regulations on telemedicine, out-of-state nurses, and unemployment benefit requirements.

“I think that we’re moving in a positive direction with a lot of [emergency declaration] mandates being removed, and as we get a little bit closer to the fall that’s gonna be our focus — which waivers we want to keep and which ones we want to let expire,” said Thompson, Corman’s spokesperson.

States have until 2024 to spend the federal money, meaning that the clock is ticking. 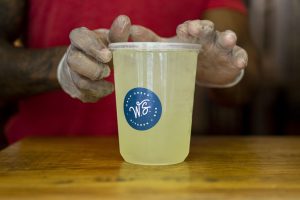 Kendrick Worth, manager at Wrap Shack in Philadelphia, creates a to-go margarita in May. Takeout cocktails are no longer allowed in the state. TYGER WILLIAMS / Philadelphia Inquirer

Despite bipartisan support, lawmakers failed to extend a popular pandemic-era provision that allowed bars and restaurants to sell cocktails to-go.

The ability to sell premade cocktails for takeout stopped when the legislature voted to end Wolf’s emergency declaration.

The House passed a bill in May, with bipartisan support, that would make permanent the sale of to-go cocktails. But an amendment to the bill by Sen. Mike Regan (R., York) expanded the measure’s scope and lost the support of Democrats, including Wolf.

Regan’s proposal would have allowed private retailers to compete with state-owned stores by selling canned cocktails. Under current law, state liquor stores are the only retailers permitted to sell them in Pennsylvania. Regan has familial ties to the industry.

The House stripped the amendment from the bill and sent it back to the Senate, which declined to act before the legislature recessed for the summer. Restaurants are now barred from selling cocktails to-go, and won’t be able to again unless lawmakers pass legislation in the fall.

Top Republican lawmakers have indicated that lobbying reform will be a priority for them this session. Thompson, Corman’s spokesperson, told Spotlight PA the senator plans to unveil a lobbying reform bill “any day now” to be voted on in the fall.

In a May statement, Corman said he hopes to address lobbyist transparency, ethical conduct, and limiting influence on the General Assembly. Some proposed changes include requiring lobbyists to disclose client conflicts, prohibiting campaign consultants from being registered lobbyists, and requiring lobbyists to complete ethics training.

Separately, several lobbying reform bills have already been introduced in the House.

Pennsylvanians may see debates on cannabis legalization on the House and Senate floor this fall. Recreational cannabis is legal in the District of Columbia and 18 states, but Pennsylvania isn’t one of them.

Wolf has thrown his support behind legalization, too, saying it would bolster “potential economic growth and much-needed restorative justice.” But the measure faces pushback in the GOP-controlled legislature, leaving its fate uncertain.