Feds roll back ‘confusing’ addiction funding rules that had deadly consequence in Pa.

The change impacts people who need addiction treatment and use medical marijuana for a substance use or mental health disorder. 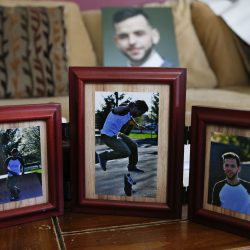 HARRISBURG — A federal agency that sends billions of dollars to states to help them respond to the opioid crisis is rolling back part of a policy that caused widespread confusion in Pennsylvania, wrongly preventing at least one person who later died of an overdose from accessing addiction treatment.

The Substance Abuse and Mental Health Services Administration has eliminated language that prohibited grant recipients from providing federal funding “to any individual who or organization that provides or permits marijuana use for the purposes of treating substance use or mental disorders.”

The Pennsylvania Department of Drug and Alcohol Programs highlighted the change in a public bulletin on Monday. A spokesperson said the agency had “no insight into what led to the change, but we are happy to see that the updated term no longer includes” the prohibition.

The federal agency previously told Spotlight PA the language wasn’t supposed to prevent providers from serving people who used cannabis for substance use disorders, as long as those patients were willing to work toward alternatives. Federal money could still pay for addiction treatment, the agency said, but not to purchase cannabis.

But in Pennsylvania, the language was widely interpreted as a ban on spending federal money to treat those who used medical marijuana for that reason.

A recent Spotlight PA investigation found, in at least one case, confusion and a failure by the state to clarify funding rules had serious consequences.

Tyler Cordeiro, a 24-year-old Bucks County man, was denied addiction treatment funding through a state program that promises help for all because he had a medical marijuana card, his family said. He died weeks later, in October 2020, from a drug overdose.

Cordeiro’s mother, Susan Ousterman, said her son was not offered any alternative sources of funding for treatment, raising questions about whether some drug and alcohol offices wrongly interpreted the federal policy as a complete ban on helping these patients.

Ousterman spent months earlier this year reaching out to state officials with concerns about whether local drug and alcohol offices were denying addiction treatment funding to others.

On Wednesday, she told Spotlight PA she’s glad the federal government changed its policy. But she still doesn’t understand why anyone ever interpreted the previous guidance to deny assistance to people seeking addiction treatment.

“I don’t have a lot of faith that anything’s going to really change with them ensuring people are getting the funds that they’re entitled to,” Ousterman said.

Each year, Pennsylvania’s Department of Drug and Alcohol Programs sends a large share of the hundreds of millions of dollars it receives in federal money to a network of 47 county drug and alcohol offices. Those offices in turn help pay for addiction treatment for people who don’t have insurance.

That system became more complicated in late 2019. Under former President Donald Trump, the federal Substance Abuse and Mental Health Services Administration said its grant money “may not be used, directly or indirectly, to purchase, prescribe, or provide marijuana or treatment using marijuana.” The agency also warned that the money could not be provided to any person or organization that “permits marijuana use for the purposes of treating substance use or mental disorders.”

Pennsylvania is one of only a few states to list opioid use disorder as a standalone qualifying condition for medical marijuana.

But the ban wasn’t as wide-reaching as it seemed. In January 2020, SAMHSA sent a clarification to the Department of Drug and Alcohol Programs and agencies in other states.

“I know many of you had asked for some written follow-up,” a SAMHSA official wrote in a Jan. 1, 2020 email, obtained through a public records request. “I hope the attached questions assist in clarifying the implementation.”

A state employee forwarded that email to top department officials, documents released through the request show.

Among other things, the 2020 guidance said organizations could still serve people who used medical marijuana for substance use or mental health disorders, as long as the patient understood the risks of marijuana and was willing to work toward alternative treatments.

But many county drug and alcohol offices in Pennsylvania continued operating as if they couldn’t spend federal money to serve those card-holders, and it’s not clear how consistently those offices used other money to make up for gaps.

The state Department of Drug and Alcohol Programs included the more restrictive language in its fiscal and operations manuals, which took effect in July 2020 and which county drug and alcohol offices follow, without the clarifying guidance. The state didn’t share the more lenient rules through a public bulletin until June 2021, after Ousterman reached out.

In response to questions from Spotlight PA, the department in June defended the delay, describing the January 2020 email from SAMHSA as “informal” — a characterization the federal agency disputed. The department said it sent out the June 2021 bulletin after receiving information “on a formal SAMHSA letterhead.”

This latest policy from the federal government goes even further.

In an email to Spotlight PA, the federal agency declined to say what specifically prompted the new guidance. “You can see from our recent press releases that SAMHSA’s priorities are to expand opportunities for people to get into treatment, as well as to grow the behavioral health workforce,” the agency said.

Denk, of the Pennsylvania Association of County Drug and Alcohol Administrators, said her members hadn’t yet had a chance to discuss the latest bulletin as a group. She expects her members and treatment providers will submit questions to the Department of Drug and Alcohol Programs, and that the agency will share its responses broadly. That kind of response, Denk said, could hopefully “avoid confusion moving forward.”

Ousterman still worries. “It’s not taken seriously by some people that these are lives that are on the line,” she said.