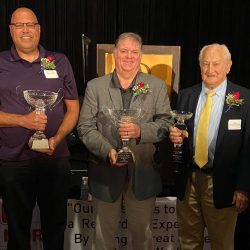 Before a record crowd of more than 200 attendees, including a number of law enforcement officers, Crime Alert President Rick Periandi presented the awards.

“We’ve had to reschedule this event several times due to Covid, but we’re so grateful to all of you for showing up and supporting our honorees,” said Periandi.

Retired Wyomissing Police Chief Jeffrey R. Biehl received the Law Enforcement Award for his outstanding service in his work in Wyomissing Borough and for his service to Crime Alert.  Biehl logged 42 years with the borough police force, rising through the ranks to chief.  He has been with Crime Alert since its 1998 founding, serving as a liaison between the group and law enforcement entities throughout the county and state.

Mike Faust, the very popular former host of the 830WEEU daily Feedback program, received the Barry E. Rohrbach President’s Award.  The award was created to honor Rohrbach, the Crime Alert Berks founder and its long-time president.  Faust began hosting Feedback in early 2001 and retired earlier this year.  He hosted a number of Feedback live broadcasts featuring Crime Alert, helping to spread the word regarding the organization’s mission through Berks and beyond.  In one of those broadcasts, more than $125,000 was raised for Crime Alert.  In presenting Faust the award, Periandi noted that Faust “knows more about Crime Alert than many of its board members.”

Ronald C. Dunkelberger Sr. received Crime Alert’s first-ever Lifetime Service Award.  He has been on the board since its inception in 1998, serving most of those years as its vice president as well as chair of the rewards committee.  Through that committee’s work, more than half a million dollars has been paid in rewards.  Dunkelberger, known by many as “Mr. Shillington,” has served many years on borough council, is a past Governor Mifflin School Board member, and has been involved in a number of civic organizations.  He is retired from the former Stroehmann-Maier’s Bakery, Reading.

Also, at the breakfast, Berks County District Attorney John Adams presented Crime Alert President Periandi with a $15,000 contribution from his office’s drug forfeiture funds.  It is, said Adams, a way in which “the bad guys are helping the good guys get more bad guys.”

In June, the winners of the 2021 annual poster contest and the recipient of the 2021 George Mack Memorial Scholarship were feted at a Reading Fightin’ Phils game.

Evan Grim of Hamburg is the recipient of the annual Mack Scholarship which is awarded to a high school graduate planning to study criminal justice and/or law enforcement in college. Evan is the son of South Heidelberg Township Police Chief Leon Grim and his wife, Gloria. 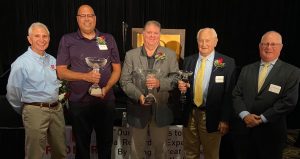