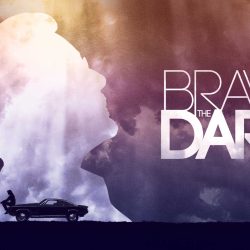 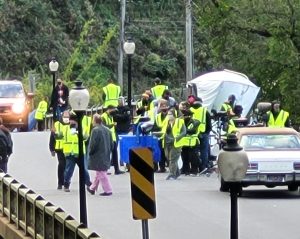 Cast and crew of Brave the Dark preparing to film scene on Poplar Neck Bridge.

If you saw what looked like a UFO looming over 422 on Sunday night, what you really saw was a helium balloon used to create a moonlight effect over the Poplar Neck Bridge. On Sunday, October 17th, filmmakers, crew members and cast filmed a climactic scene for the upcoming film, Brave the Dark.

Brave the Dark, directed by Damian Harris, tells the true story of Nate Williams, a homeless teenager, and his relationship with Stan Dean, a local drama teacher, who attempts to help Nate as he confronts the ghosts of his past. The movie is set in 1986 and largely takes place at Garden Spot High School in eastern Lancaster County.

According to Derek Dienner, producer and founder of MAKE/FILMS, the Poplar Neck Bridge was the type of location they were looking for to film a major scene at. “We were trying to find (a location) that was accessible, had an older look to it,” Dienner said. “It’s minimally updated, and it’s close to Lancaster.” 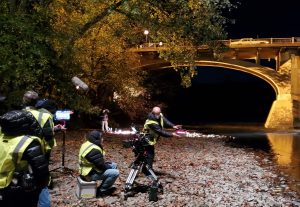 The Poplar Neck Bridge is located in Cumru Township and is the only bridge connecting Poplar Neck Road to the Western Berks Landfill, crossing over the Schuylkill River. It was built in 1918 and was reconstructed in 1952 and updated in 2019.

As for Brave the Dark, the film touches on themes of trauma and mental illness, themes that are important to Dienner, who also helped to produce Finding Jenn’s Voice (2014). “I’m all about making movies that matter and making change in the world, and also celebrate the underdog… How can we celebrate true-life stories of people overcoming big things?”

Dienner also notes a personal connection to the characters that further inspired him to co-produce the film. “I knew Stan Dean really well, I know Nate really well, so when the story started developing I knew it was something I wanna get behind.”

Brave the Dark is co-produced by MAKE/FILMS and Inspiring Films and stars Jared Harris (Chernobyl, The Crown) as Stan Dean and Nicholas Hamilton (IT, Captain Fantastic) as Nate Williams. The film is DP’d by Julio Macat, A.S.C. (Home Alone, Pitch Perfect). No release date has been announced. 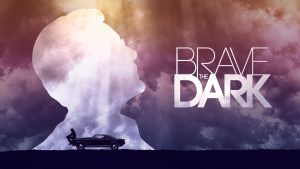