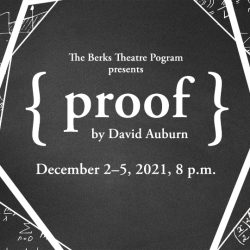 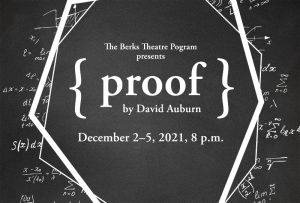 Proof was written David Auburn and originally produced at the George Street Playhouse in 2000. It was presented on Broadway in October 2000. Proof won the 2001 Pulitzer Prize for Drama and the Tony Award for Best Play.

The play centers around Catherine, the daughter of Robert, a recently deceased mathematical genius in his 50s and professor at the University of Chicago, and her struggle with mathematical genius and mental illness. Catherine cared for her father through a lengthy mental illness. Upon Robert’s death, his former graduate student Hal discovers a paradigm-shifting proof about prime numbers in Robert’s office. The title refers both to that proof and to the play’s central question: Can Catherine prove the proof’s authorship? Along with demonstrating the proof’s authenticity, Catherine also finds herself in a relationship with Hal. The play explores Catherine’s fear of following in her father’s footsteps, both mathematically and mentally, and her desperate attempts to stay in control.

Jim Brown, instructor in theatre at Penn State Berks, is the director and producer. He will also portray Robert.