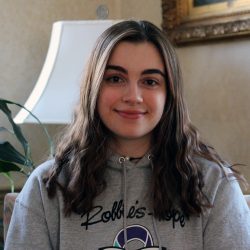 Samantha Hagenbush, a Penn State Berks sophomore, wants teens to know that “It’s ok not to be ok.” As an ambassador for Robbie’s Hope, a nonprofit organization that aims to broaden and deepen awareness of teen anxiety, depression and suicide, she helps to spread the word about mental health resources.

Robbie’s Hope was started by the Eckert family of Colorado after their 15-year-old son, Robbie, committed suicide in October 2018. A popular high school sophomore, Robbie had good grades, was active in sports, and had big plans for the future, but privately he battled intense darkness and depression. His parents started the organization to carry on Robbie’s legacy of “putting others first, lifting others up, and being a positive influence.”

The tagline, “It’s ok not to be ok,” reflects Robbie Hope’s mission to end the stigma of mental illness and ultimately to cut the rate of teen suicide in half by 2028, which increased nearly 60% among those aged 10 to 24 between 2007 and 2018, according to a report released in September 2020 by the Centers for Disease Control and Prevention. The rise occurred in most states, with 42 experiencing significant increases.

Hagenbush, a kinesiology major from Rockaway, New Jersey, explains that she became an ambassador due to her own struggles with mental health and her desire to help others. She joins more than 2,000 teen ambassadors across the country who help spread the word about Robbie’s Hope and mental health resources however they can, including through their social media accounts. In fact, Hagenbush helped to organize an Out of the Darkness suicide prevention walk in 2021, a joint initiative of Penn State Berks and Kutztown University, and she had an opportunity to speak to attendees about Robbie’s Hope as part of the event.

At Penn State Berks, Hagenbush works as a peer health education mentor and she participates in the college’s Wellness Week, sharing information about suicide prevention. She is also an orientation leader for special populations, including students with disabilities, during the college’s Welcome Week, a member of the Lion Ambassadors student organization, and secretary of the college’s kinesiology club.

Hagenbush was recruited to come to Penn State Berks by a women’s basketball coach. “I took a tour of the campus and when I learned the college offers the kinesiology degree, that was it!”  Previously, she attended Morris County School of Technology, where she studied in their Academy of Sports Medicine program and earned a personal trainer’s certificate upon graduation –– allowing her to assist her father, who is a personal trainer by trade.