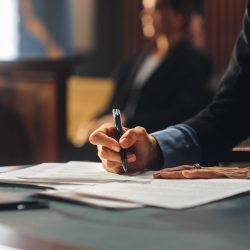 A new bill in Pennsylvania would provide money for public defenders, who say they’re struggling to take on the cases of people charged with crimes who can’t afford an attorney.

Senate Bill 1317 would create the Indigent Defense Advisory Committee, and a Grant Fund to provide state-level funding for the public defender system. Currently, the counties kick in to provide this funding, while state dollars go to the state prosecutors.

Sara Jacobson, executive director of the Public Defenders Association of Pennsylvania, outlined why this potential change has taken so long to come to fruition.

“It’s some combination of a lack of political will and the amount of money it will take to fund indigent defense adequately,” said Jacobson. “It’s kind of easy to say, ‘Oh well, the counties should take care of that,’ and then consider it a problem solved, I guess. I’m glad that our legislators are taking a look at this now.”

The bill has passed out of the state Senate Judiciary Committee, but Jacobson said it faces an uphill battle in the General Assembly.

The current system has caused the Luzerne County public defenders to stop taking new cases because of a lack of funding. And Jacobson said this is the second time in a decade that budget deficiencies have caused this to happen.

She said she feels the current method of funding public defense is failing the people who need it most.

“Public defenders in Pennsylvania have more cases, more clients, than they can handle,” said Jacobson. “This is a job that’s required by the Constitution. The Constitution says that the government must provide assistance, and effective assistance of counsel, in criminal cases – and Pennsylvania is falling short.”

Pennsylvania is one of only two states where the state doesn’t help fund indigent defense. Jacobson said changing the system would allow public defenders to do their jobs more effectively.