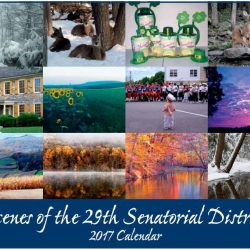 POTTSVILLE – Senator David G. Argall (R-Schuylkill/Berks) today unveiled the winners of his 2017 “Scenes of the 29th Senatorial District” calendar contest, which features photos from throughout Berks and Schuylkill counties.

On Tuesday, Argall unveiled the calendar, featuring 12 of the top photos as voted by local residents.

“We had an overwhelming response to our first-ever photo contest,” Argall said. “I appreciate everyone who participated to highlight some of the most beautiful landscapes and wildlife in the 29th District.”

Argall invited local residents to share their best photos for the various seasons throughout the year – winter, spring, summer and fall. The top three photographs as selected by voters are included in the calendar. Local residents submitted over 150 photos for the contest and 947 votes were cast for favorite photos.

The following individuals will have their photo featured during the month listed below:

Argall notes that the calendars will be available for residents to pick up on a first-come, first-served basis at his local offices in Mahanoy City, Pottsville, Tamaqua, Hamburg and Spring Township. Calendars are also available on Sen. Argall’s website.