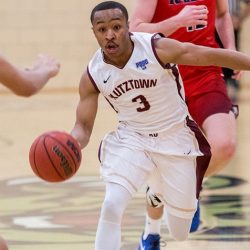 KUTZTOWN, Pa. – One week after Anthony Lee won his first career Pennsylvania State Athletic Conference (PSAC) East Athlete of the Week award to give the No. 10 Kutztown University men’s basketball team its first winner of the season, teammate Ethan Ridgeway joined Lee in receiving for the first time in his career on Monday, Feb. 6.

Ridgeway helped KU (14-2 PSAC, 18-2) extend its winning streak to 10 games for the first time since 2011-12 as the Golden Bears defeated No. 9 Shippensburg and Lock Haven last week. The junior led the team with averages of 19 points and 9.5 assists, while also adding 7.5 rebounds and 2.5 steals per game.

At Shippensburg on Wednesday, Feb. 1, Ridgeway led the charge offensively with 20 points, eight rebounds and eight assists. Then on Saturday, he once again flirted with a triple-double, notching 18 points, 11 assists, seven rebounds and three steals for his team-leading sixth double-double of the season. He shot 7-of-12 from the field and 4-of-4 from the free throw line.

Ridgeway is currently leading the PSAC, and ranks third in the NCAA, with an average of 8.4 assists per game. He is three assists shy of breaking Kutztown’s single-season assist record of 170, held by Maurice Bryant in 2005-06.

KU looks to extend its winning streak to 11 for the first time since the 2009-10 team won the first 14 games of its season when the Maroon and Gold welcome Mansfield to Keystone Arena for a 7:30 p.m. tip-off on Wednesday, Feb. 8.