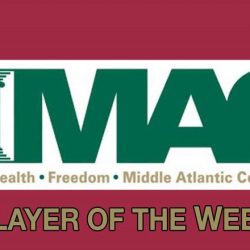 Baseball swept the award as Nathan Sides was named Player of the Week and Thomas Malik was claimed Pitcher of the Week. Emily Gilbert received the nod for the third consecutive week for women’s golf.

Sides led the Crusaders to a 3-1-1 week while batting .667 (16-for-24) with a .667 on-base percentage, and a 1.042 slugging percentage. Sides finished the week with 11 RBIs, nine runs scored, two doubles, two triples, home run and was 3-for-3 on stolen bases. He now ranks 10th in Division III with a .484 batting average. The sophomore had three or more hits in 4-of-5 games. He went 9-for-12 against Rutgers-Newark, including 5-for-6 in game one with four RBIs and three runs scored. In a 2-1 series win over Albright, Sides went 7-for-12 with four RBIs, five runs scored and two triples.

Malik shut down Albright in game two to even the series are 1-1 in a 14-1 victory. Malik allowed just one earned run, six hits, walked one and struck out six batters over six innings of work. The sophomore struck out four of the six batters looking.

Gilbert earns her third-straight conference weekly award, and her fourth of the season. Gilbert averaged an 81.3 over three matches, including a new school record 76 (+6) at Stonewall to tie for first at the Ursinus Invitational. She went on to finish second on a match of cards. She then finished in 11th at the Alvernia Invitational with a round of 87. Gilbert ended the week with a second-place finish at the LVC Spring Invitational with a round of 81, two strokes behind the champion from Franklin & Marshall.