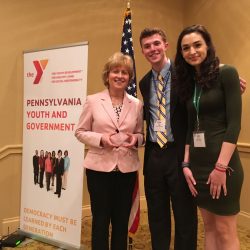 HARRISBURG – The State YMCA of Pennsylvania and the Pennsylvania State Alliance of YMCAs honored Sen. Judy Schwank with a Champion of Youth Award at the 2017 YMCA Champions of Youth Luncheon.

The luncheon, held at the Red Lion Hotel in Harrisburg, is the opening event of the Pennsylvania YMCA Youth and Government Program’s annual Model Legislation Convention. Over the weekend, 660 students representing more than 30 high schools and YMCAs converge on the State Capitol and act as Representatives, Senators, Lobbyists, Administration, Reporters, Attorneys and Supreme Court Justices.

Schwank was chosen for the Champion of Youth Award because of her commitment to local YMCAs, like the Tri Valley Branch in Fleetwood, and her support of YMCA of Reading & Berks County events.

Michael Miller, a Hershey High School senior and the Model Legislation’s Speaker of the House, introduced Schwank to the luncheon.

“The YMCA of Reading and Berks County is extremely lucky to have her as State Senator and we at the YMCA Youth and Government program are honored to have her as our friend, too,” he said. “She advocates for our teens and wholeheartedly supports our model legislature through our Sponsor Your Seat program.”

Schwank said she was in awe of the magnitude of the YMCA’s Youth and Government Program, and grateful to help in any way she can.

“This is going to be a transformative event in your life,” she said. “You’ll have the chance of a lifetime to really model what happens in government.”