Gilbert Player of the Year; Alvernia Third at MACs 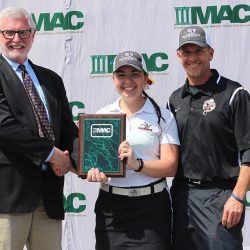 Gilbert, who shot a championships-record low 77 on Saturday, fired the individual low round of the day on both days. She earned MAC Rookie of the Year as a freshman last year at Hershey and follows that up with her first Player of the Year honor. Alvernia shot a team total 781 to finish third out of eight teams. Junior Cayla McCarty shot 97 on Sunday to go with her 90 on Saturday and earned Second Team All-MAC honors–her third All-Conference honor in three years.

“Emily absolutely ran the table in April earning three straight MAC Golfer of the Week honors,” noted Alvernia head coach Tom O’Connell. “The big prize was the going after the Player of the Year Award and medalist awards at the Conference Championship at Hershey. Emily has a strong history at Hershey East playing some big AJGA events prior to college. She’s very comfortable there and this weekend put on autopilot.”

Only two players in the field were within 10 stroke of Gilbert after day one. Stevenson’s Morgan Wirtz was eight back at 85 and Eastern’s Sofia Frantz was 10 back at 87. Wirtz was able to shave a stroke off the deficit starting Sunday’s round par-bogey while Gilbert went bogey-bogey, but the Stevenson junior played the next three holes in 8-over while Gilbert played 3-5 with a par and two bogeys.

Gilbert moved comfortably ahead with a birdie on the par 5 6th. She and Emily Haas (Stevenson) were the only players in the field to card at least one birdie in each round. Frantz, who eventually finished in second place, stayed within shouting distance, but was never able to make a series dent in Gilbert’s advantage.

“Emily opened the tournament with a birdie and followed with a par and never looked back, she just left the field behind,” said O’Connell. “She was in the zone. She kept the ball in play and in good positions to score the entire tournament. She left the field behind early in the final round and gained more separation with each hole which made the difficult home holes a stress-free experience.”

Finishing ahead of Gilbert, McCarty needed a bounce-back inward nine to keep her All-Conference streak alive. She went out in 51 on Sunday and played the back nine in 46 to sneak into the top 10 by just two strokes.

“Having both Emily and Cayla earn All-Conference is very gratifying for our program,” said O’Connell. “Our goal this year in the fall was play our way into the final pairing on Sunday and finish at least third in the conference. We kind of expected that Eastern and Stevenson were the teams to beat and would be tough to catch this year. We put a reachable goal out there, and that was to be the next best team in the conference. The ladies played hard for a full schedule. Their dedication and time commitment paid off in today’s accomplishments.”

Sophomore Jordan Kissner, the only Crusader to improve her score from day one to day two shot a 201 two-day total to finish in a tie for 18th place. Jenna Trento finished at 232 and 32nd place.