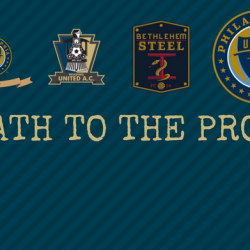 (May 8, 2017) – Just inside the east gate at Talen Energy Stadium, home to the Philadelphia Union, you’ll find a large mural dedicated to the Union’s path to the professional ranks. That path is clearly delineated on the mural, from the Philadelphia Union Academy, on to Reading United A.C., then Bethlehem Steel and finally, the Union.

The Major League Soccer side prides itself on developing the next generation of first team players. Union Academy stars Lamine Conte, Joey Dezart, Jerren Nixon Jr. and Raheem Taylor-Parkes are set to take their next step on the path to the pros as they join Reading United for the 2017 Premier Development League season.

Since reaching a player development agreement with the Union in 2010, Reading has traditionally featured an array of academy products. Former Union Academy stars like Keegan Rosenberry, Darius Madison and Colton Storm continued their development with United before moving to professional soccer. Will Campbell, Kevin Carvalho, Mo Conde and Zach Zandi, all graduates of the Philadelphia Union Academy, will also be on Reading United’s squad for the summer of 2017.

Dezart, Nixon, Conte and Raheem Taylor-Parkes were all graduates of the Union’s YSC Academy in 2016 and should pay immediate dividends for Reading on the field this summer.

A former captain for the Union Academy team, Dezart joins Reading after his freshman season with Atlantic Coast Conference champions, Wake Forest. The Jackson, New Jersey native made three appearances for the Deacons. The midfielder earned a call-up to the Jamaican Under-20 National Team in 2016.

Nixon Jr. just finished his freshman year at the University of Virginia. He appeared in eight games and earned one start against Atlantic Coast Conference powerhouse, Wake Forest. Nixon scored six goals for the Philadelphia Union Academy Under-17 and Under-18 sides in 2016. He also earned a call up to Trinidad & Tobago’s Under-20 training camp last April.

Alongside fellow Reading United teammate Mo Conde, Conte attended the University of Mobile for his freshman year. He earned All-Freshmen Team honors in his first year at Mobile. He appeared in fourteen matches in his final season for the Union Academy.

Taylor-Parkes attends the University of Virginia with Nixon. He appeared in fifteen matches this season for the Cavaliers, making one start. He was second on the team in assists with three. Parkes was the joint top scorer for the Union Academy in 2015 and 2016. He has earned call-ups for the Canadian youth national teams and was a member of U.S. Soccer Residency program in 2014. The Tampa, Florida native made his Bethlehem Steel debut last May in a match against FC Montreal.

Reading United will kick off their 22nd season on Saturday, May 13 when they host local rivals Lehigh Valley United at Don Thomas Stadium. Kickoff is set for 7:30pm with tickets available online. All United home matches throughout the 2017 PDL season will be played at Exeter Township Senior High School. Tickets for the all regular season matches are available at www.readingunitedac.com. Contact our ticket sales team at [email protected] for all your group needs.