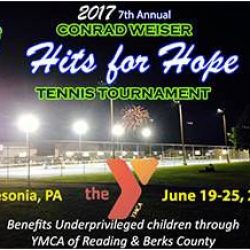 Hits for Hope Tennis Tournament – every day and evening June 20-25 8am-10pm – Tournament has 34 draws for players ages 5 through 75. Tournament is the largest  tennis tournament in PA again in 2017, over 200 players already signed up!

Location: All events are held at Conrad Weiser Tennis Facility

The record setting Hits for Hope  Hope Tennis Tournament is the largest tennis tournament in the history of PA with 300 players annually playing and is 3rd largest on the east coast of the United States is back along with the Run for Hope 5k.  Hits for Hope will attract tennis players of all ages and ability levels from all over the east coast between the  ages of 10 and 75 to play in the week long tournament.

Hits for Hope Night of Champions Gala and Awards in which the check to the YMCA of Reading and Berks County will be giving out in addition to numerous awards to members of the Berks County Tennis community. The induction of the Berks County Tennis Hall of Fame  2017 Inductees, 2017 Berks High School Player of the Year awards and Merv Heller Memorial Scholarship Winners will be acknowledged.  Marquee night matches will take place after the ceremony and fireworks from the adjacent Robesonia Street Fair will go off at 9:30pm.