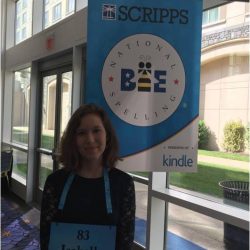 National Harbor, MD – Spelling once again takes center stage at the Gaylord National Resort and Convention Center, just outside of Washington, DC, for the 90th annual Scripps National Spelling Bee. From a talent pool of millions, 291 spellers made the trip for ‘Bee Week’, one of which is from Berks County. Isabelle Stetka of Barto, Pennsylvania is a 14-year old 8th grader at Boyertown Junior High West. She punched her ticket to the main stage by correctly spelling the word ‘dinghies’ back in mid-March when she won the Berks County Spelling Bee Championship Finals.

Before even taking the stage, every speller has a busy week in store. The week began at Washington Nationals ballpark for a picnic followed by a preliminaries test where spelling and vocabulary are tested. After the test, each speller gets a chance to spell two words on the stage. Isabelle displayed her successes by correctly spelling ‘panary’ and ‘rehearsal’ in a calm and cool manner. Although she did not qualify to continue in the competition to the finals due to her score on the preliminaries test, she was so thankful for all the support she got from her peers at school. Outside of her spelling talents through reading the dictionary and studying flashcards, she was excited to get back to her hobbies: reading, writing, and binge watching television shows.

Every year, the bee captures our country’s attention and this year was no different. Edith Fuller, a 6-year old Kindergartener made history by becoming the youngest speller to compete in the Bee’s known history. Although her preliminaries test did not qualify either to continue, 15 finalists battled it out in primetime to take home a trophy, $40,000 cash and prizes, a media tour, and bragging rights. In order to prevent co-champions, which have happened for the last three years, the bee implemented a new rule that these 15 finalists take an additional test that in the event the bee gets to the end of the championship word list. If this happened, they can go to this test to determine who has the highest score to win the competition. However, that rule was not enforced this year as 2017 Scripps National Spelling Bee Champion, Ananya Vinay from Fresno, California emerged after 36 rounds of words. The winning word this year was ‘marocain’ defined as ‘a ribbed crepe fabric used in women’s clothing’.