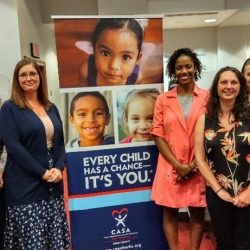 CASA of Berks County swears in 12th class of volunteers for a total team of 51 court-appointed special advocates.

After 8 years traveling the world in the Navy and several more years as a defense contractor, Jennifer Michael is looking forward to her CASA volunteer responsibilities working with abused and neglected children.

“It means a lot to me that they have someone speaking on their behalf.” Jennifer explains, “I see where there is a gap and I see a lot of moving parts. I hope that being a CASA can help alleviate their trauma and make the process easier for them.”

CASA, which stands for Court Appointed Special Advocate, is a program that trains volunteers to work with abused and/or neglected children to determine what is in the best interest of keeping them safe and nurtured.

“If it helps one child, it’s worth it. Just helping the kiddos is what I want to get out of it,” said Jennifer.

Jennifer Michael was sworn in as an official CASA with six others during a court ceremony August 2, 2021 at the Berks County Services Center. The group makes up the 12th class of volunteers since CASA of Berks County was founded in 2015.

John Deegan, one of the six other volunteers sworn in with Jennifer, volunteers his time hugging and cuddling infants at the Tower Health NICU. He is pleased to join a team of 51 court advocates who helped over 100 children last year. John has 37 years’ experience in various positions at Wernersville State Hospital. His interest is to work with kiddos who reside in residential facilities.

“I think people in that situation should have an advocate and I look forward to being one,” said John. 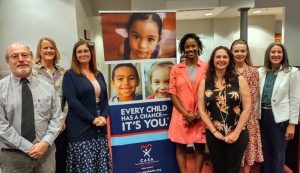 CASA volunteers serve as an extension of the eyes and ears of the judge in dependency court cases. Volunteers undergo more than 30 hours of training that includes observation of dependency court hearings. After being sworn in, a CASA is appointed by a judge to advocate for the child’s best interests.

The CASA stays with the child until their case is closed and the child reaches a safe, permanent home. CASA volunteers work with legal and child welfare professionals, teachers, family members, and others to ensure the judges have all the information they need to make potentially life-changing decisions for each child.

Diane Marabella was sworn in as a CASA with the sixth class of CASAs in March 2019 and now serves as Vice President of CASA Berks Board of Directors while continuing as a CASA volunteer. Now on her third case, Diane says it’s fulfilling and she is proud of the work done by the agency.

“I think to be able to devote some of your time to give these kids a voice during traumatic times…I think that’s just awesome,” said Diane.

Dacey Horohoe was excited to sign her oath at the swearing-in ceremony. Dacey found out about the program from David Green, a CASA Board Member, and through friends who are social workers. She is looking forward to being a positive piece of the puzzle and feels that being able to help just one child makes a dramatic difference.