Berks Paddler Puts Water to the Test During 100-mile Sojourn 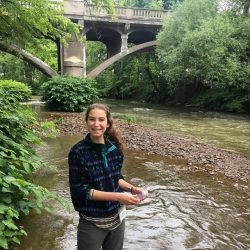 PHILADELPHIA — Sarah Chudnovsky of Shillington, Pennsylvania spent a week testing almost 2 million people’s drinking water on June 3-9. This occurred as she and more than 200 others paddled up to 112 miles during the Schuylkill River Sojourn, which spans from Schuylkill Haven to Philadelphia.

Chudnovsky’s journey was possible thanks to the Schuylkill Action Network, which provided her with equipment and a scholarship for this, its Sojourn Steward program. The SAN has put Chudnovsky’s discoveries to use by uploading them to the GLOBE program. This will allow users around the world to compare her data with their own and those of others.

“Throughout the sojourn, the water test results showed the river staying within healthy ranges,” said Chudnovsky. “However, we did see the amount of [dissolved] oxygen decrease as we traveled downstream from the forested headwaters in Schuylkill County. We also observed the levels of pollutants like salts, fertilizers, and metals increase as we paddled through areas with increasing development, like Berks and Montgomery counties.”

Chudnovsky performed a variety of duties as sojourn steward, in addition to testing water samples. These included photographing wildlife, blogging, and sharing updates on social media. These reports are available on Facebook, Instagram, and Twitter using the hashtag #SojournSteward.

Virginia Vassalotti coordinates the Schuylkill Action Network on behalf of numerous members like her employer, the Partnership for the Delaware Estuary. She sees every paddler like Chudnovsky as a citizen scientist in the making.

“Imagine if just 1 percent of Schuylkill River Trail users tested the river’s water like Chudnovsky,” said Vassalotti. “We’d have over 11,000 people looking out for the well being of our rivers and streams, which provide us with drinking water, watersports, and jobs.”

Learn more about water monitoring by visiting the Hydrosphere page on Globe.gov. This is where Chudnovsky’s data is posted.

The Schuylkill River is part of the Delaware River Watershed that spans four states and provides drinking water for 15 million people. The Partnership for the Delaware Estuary is working with the Schuylkill Action Network and other partners across the region to protect and restore the waterways that keep communities healthy and the economy thriving.