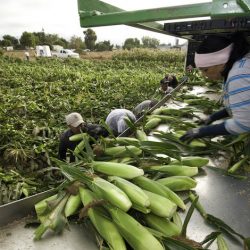 HARRISBURG, Pa. – A federal appeals court has refused to order the Environmental Protection Agency to decide if it will ban a pesticide linked to brain damage in children. Late last year the EPA said exposure to chlorpyrifos, a pesticide related to Sarin nerve gas, put children, farm workers and the environment at risk. It was banned from residential use 17 years ago. But in March the agency refused to issue a ban on its use in agriculture. According to Erik Nicholson, national vice president of United Farm Workers, the EPA itself already has determined that the science is clear.”The only question with the previous administration was how quickly we were going to remove this chemical from our food supply,” he states. “Under the current administration, they’re arguing the science is ambiguous, that more study needs to happen.”The EPA now says it needs another five years to study the issue, and the 9th Circuit Court of Appeals declined to intervene.But Nicholson points out that despite the known dangers, the pesticide is still in use.”All the while, the women and men who harvest our food continue to have dangerous exposures in our opinion, as well as consumers when we consume food that may have residues,” he points out.Chlorpyrifos exposure in children has been linked to reduced IQ, loss of working memory and attention deficit disorders.Nicholson calls any further delay unethical, arguing that farm workers have not consented to be test subjects for the EPA to study the effects of a chemical known to be dangerous.”Nor have we as consumers consented to being used as guinea pigs to continue to consume food products that that may have residues and for the government to look at what impact this might be having on us,” he stresses.Nicholson says the environmental groups will continue to challenge the delay in the courts, and look for other ways to remove chlorpyrifos from use.