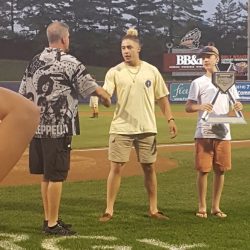 A native of Mohnton, Pa., and a Governor Mifflin standout, Hulsizer is a familiar name in Baseballtown. He was named First team All County and Quad-A All-State player while at Governor Mifflin. Hulsizer is currently a sophomore at Morehead State University and put his power on display during the 2017 College Homerun Derby, which took place during the College World Series at TD Ameritrade Park.

A First Team All-American and Ohio Valley Conference Co-Player of the Year, Hulsizer finished the regular season as the nation’s leader with 27 home runs and was second with a .775 slugging percentage during the regular season. He set the MSU and OVC record for both home runs and total bases. Hulsizer batted .349 and ranked 16th nationally with 87 hits and had an on-base percentage of .435.

Hulsizer set the tone early in the first round of the derby as he blasted 19 home runs to advance in the competition. He went up against Alabama slugger Chandler Taylor and bested Taylor by defeating him 17-16 in the final round.

The derby as a whole consisted of three rounds and Hulsizer displayed his power throughout the entire competition. He led the way with 19 in the first round and 16 in the second, which gave him a derby leading 35 home runs heading into the championship round against Taylor who finished with 33.

The derby came down to the very end as Taylor had an opportunity to defeat Hulsizer on the final swing. Taylor’s final out came on a bonus ball that would have counted for two home runs and given him the title over the Mohnton native. Taylor ultimately grounded out to end the derby and secure the victory for Hulsizer.

Hulsizer played multiple games at America’s Classic Ballpark during his days at Governor Mifflin and is yet another proud product of Baseballtown and the proud baseball tradition that comes with it.