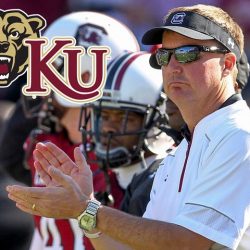 KUTZTOWN, Pa. – Head coach Jim Clements has announced the addition of G.A. Mangus to his coaching staff for the 2017 season. Mangus will serve as the offensive coordinator, quarterbacks and tight ends coach and brings a wealth of successful experience at the Division I and III levels.

Mangus joined the South Carolina staff in 2009. He guided quarterbacks to numerous school records not only for yardage, touchdowns and completion percentage, but for career wins for a starting quarterback. In his final season in 2014, the Gamecocks scored nearly 33 points and gained more than 440 yards of offense per game.

He is coming off a one-year stint at South Carolina State in 2016.

Prior to Carolina, he was the offensive coordinator and quarterbacks coach at Middle Tennessee State for three seasons under former Gamecock coach Rick Stockstill.

Mangus was the predecessor to current KU head coach Jim Clements at Delaware Valley College. Mangus coached the Aggies for four years from 2002-05, as Clements took over following his departure in 2006.

In his first year at Delaware Valley, Mangus went 2-8 in his first season, and turned the team into an NCAA Division III championship contender. In the next three seasons, Delaware Valley notched a 33-4 record, won three conference championships, and advanced to the national quarterfinals twice.

In 2004 and 2005, Mangus led the Aggies to perfect back-to-back regular-season records and the team’s first overall Middle Atlantic Conference championship. The 2005 squad also earned a MAC title and advanced to the NCAA playoffs.

Mangus was a quarterback at the University of Florida from 1988-91, including two years under coach Spurrier. During that time, he was a member of the school’s first SEC championship team in 1991.

Following his graduation in 1992, Mangus remained at Florida for three years, as a graduate assistant and assistant offensive line coach. The Gators won two SEC titles (1993 and ’94), reached the championship game in 1992 and made three bowl appearances during that time.

Mangus’ first full-time position came at Widener. He began as the offensive line coach, moved into the running backs and quarterbacks coach, and was eventually elevated to offensive coordinator. The Pioneers had two eight-win seasons and made two postseason appearances, including a spot in the 1995 Division III playoffs.

Mangus became the assistant head coach and offensive coordinator for Ursinus College in June 1999 and joined a program that had gone 3-7 in 1998. The 1999 squad posted a school-record 10 wins, including its first-ever Division III playoff win. The Bears went 8-2 the following year for their first back-to-back winning seasons since 1954.