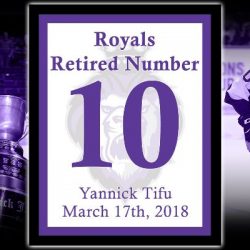 The Reading Royals of the ECHL, affiliate of the Philadelphia Flyers, announced at the organization’s Annual Town Hall Meeting held at Stokesay Castle that the team will induct forward Yannick Tifu into the Royals’ Diamond Credit Union Wall of Honor.

In addition, the Royals will permanently retire Tifu’s Number 10 from service with the organization.

The Wall of Honor Induction and Number Retirement ceremony will take place as part of a full night of entertainment and excitement at Santander Arena on March 17, 2018 (@ 7 p.m.) when the Royals face the Brampton Beast.

Tifu, who is the third all-time leading scorer for the Royals with 222 points (84g-138a) in 245 regular season games, was the captain of Reading’s 2013 Kelly Cup Championship team. He was chosen as the team’s most valuable player twice — including the 2012-13 championship season — and is the only player in team history to receive the Fans’ Choice Award on four separate occasions. It is anticipated that a number of Tifu’s former teammates on the 2013 championship team — including, of course, Head Coach Kirk MacDonald and Assistant Coach Patrick Wellar — will be in attendance for what promises to be a special night packed full of activities.

In addition to the Diamond Credit Union WOH Induction – Number Retirement Ceremony, the March 17 St. Patrick’s Day Extravaganza is scheduled to include:

1. The return of St. Hattrick’s Night where some lucky fan in attendance will win $10,000 if a Royal player registers a hattrick;

2. An appearance and autograph session by World Wrestling Entertainment Hall of Famer “The Million Dollar Man” Ted DeBiase; and

Season Ticket Holders, who are present at the game on March 17, will also receive a special limited edition commemorative Yannick Tifu puck, which can be signed by Yannick that night.

The Royals are so excited about the activities scheduled for March 17 that the team has put together special combination ticker offers for Season Ticket Holders and the general public for the St. Patrick’s Day Extravaganza game and the team’s Home Opener on October 21 (@ 4:00 pm) against the Adirondack Thunder.

Season Ticket Holders will have the first opportunity to purchase individual tickets—at the special STH prices — to the March 17 St. Patrick’s Day Extravaganza game starting tomorrow (Wednesday, August 30) at 9:00 am. In addition, for those STHs who do take advantage of this first chance to purchase extra tickets to the March 17 game, they will also have an option to purchase additional tickets to the home opener for just $10.00. STHs will be able to capitalize on this special ticket combination deal right up to the date of the Royals’ home opener — October 21.

For the general public, tickets to the March 17 St. Patrick’s Day Extravaganza will go on sale on Thursday, September 14 (at 9 a.m.). In a special combination deal, fans will have an option to purchase two Purple Zone Tickets for BOTH the March 17 game and the Home Opener (four total tickets) for just $66.00; or to purchase two Silver Zone Tickets to BOTH games (total of four tickets) for just $56.00.

Please note that all ticket sales for these ticket combination specials noted above will be handled directly through the Royals’ office. Call 610-898-7825 for complete service and assistance in taking advantage of these special offers.

Full Season Tickets and Mini-Plans for the Royals’ 2017-18 ECHL season are currently available. Call 610-898-7825 for more information or log onto www.royalshockey.com.