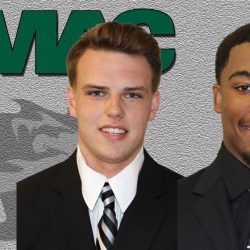 Baylor was instrumental for the Lions’ defense in a 34-31 come-from-behind victory at King’s. Baylor finished the game with 12 tackles (nine solo), five tackles for loss (20 yards), three sacks (14 yards), a forced fumble and a fumble recovery that he returned 10 yards for a touchdown. Baylor picked up the loose ball late in the second quarter, trailing 17-0, to get the Lions on the board. The senior’s final sack came on the last play of the game when King’s was looking for a Hail Mary to win.

Goetz earns his second conference weekly award of the season. The junior made two fourth quarter field goals, including the game-winning field goal in the final minute of the game to complete the come-from-behind win at King’s. The Lions were trailing 31-28 with 4:02 remaining when he tied the game before kicking the game-winner with 58 seconds remaining. Both kicks were from 32 yards out.

Albright returns to action on Saturday, Oct. 7, for Homecoming against No. 10 Delaware Valley. Both teams are 5-0 overall and 4-0 in MAC play.