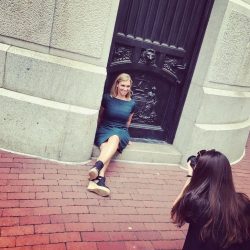 Amy Impellizzeri, a former litigator and start-up executive, has released her third novel, THE TRUTH ABOUT THEA, a psychological legal thriller tackling the controversial issue of social media addiction.

Booklist says: “Impellizzeri unleashes a tangled skein of half-truths and lies that unravels with each chapter.  Perspectives alternate between that of almost sociopathic Thea and others who are trying to discover Thea’s truth.  This satisfying story will keep readers guessing until the end.”

The Truth About Thea opens in the Philadelphia Court of Common Pleas, with a woman named Thea Brown on trial for, among other things, arson and fraud. Impellizzeri says the novel’s opening setting is no coincidence.

“My 13-year litigation career began with a trial at the Court of Common Pleas in 1997. Now that I have transitioned away from the law, setting my third novel there (and indeed, returning to the courthouse for an author photo shoot!) was truly a full circle moment for me.”

The trial ends abruptly when Thea Brown’s expert witness submits a report claiming she is addicted to social media. Instead of deciding the issue, the Philadelphia judge accepts a plea bargain in which Thea agrees to go to rehab for her alleged social media addiction.

Locked up in a rural Pennsylvania rehab, Thea Brown becomes the patient of Will Cann, a recovering heroin addict-turned-counselor for whom truth is a championed element to recovery. But the reader soon learns that Will Cann has a dark secret—shared with no one outside of his anonymous support meetings. Over twenty years ago, after an ultimatum from his pregnant ex-wife, Will was forced to assume a new identity and to fake his own death to get out from under his dealer and user-friends once and for all.

As Will counsels Thea, the past is on a collision course with the present. Both Will’s, and his young client’s, fast-held secrets start to unravel… and reveal, at long last, the truth about Thea.

The Truth About Thea is Impellizzeri’s third novel. Her debut novel, Lemongrass Hope (Wyatt-MacKenzie Publishing 2014) was a 2014 INDIEFAB Book of the Year Bronze Winner and a National Indie Excellence Awards Finalist. Her sophomore novel, Secrets of Worry Dolls, was released in December 2016 by Wyatt-MacKenzie Publishing, and was an INDIEFAB Book of the Year Bronze Winner (Fiction-Multicultural) and a Finalist in the WFWA Star Awards for Published Women’s Fiction. Impellizzeri is represented by Bob Diforio of D4EO Literary Agency.

Impellizzeri is also the author of the peer-reviewed nonfiction book, Lawyer Interrupted, published by the American Bar Association in 2015, and which has been featured by, among others: ABC27, The Huffington Post, TheAtlantic.com, and Law360.

Impellizzeri is a frequent invited speaker at Lawyers in Transition Meetings, annual Bar conferences, and creative writing workshops across the country, including at the Yocum Institute for Art Education in Wyomissing. She is the Advancement Director for St. Catharine of Siena School in Reading and is also a member of the Tall Poppy Writers, an innovative marketing co-op of award-winning, best-selling and acclaimed women writers and co-founder of the group’s innovative Facebook group, BLOOM (bit.ly/areyouinbloom).

The Truth About Thea is available for order at Firefly Bookstore in Kutztown, Barnes & Noble, Amazon, and wherever books are sold. For more information about Impellizzeri and her writing, check out her website at www.amyimpellizzeri.com.