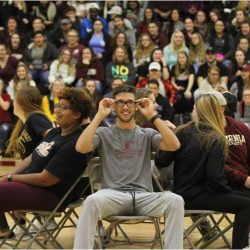 With Thanksgiving nearing, students will have the opportunity to go home and see family, while getting a much-needed break from their studies.  The month of November also marks the beginning of the winter sports seasons for athletes at Alvernia University.  One of the most popular sports at Alvernia is basketball, and the men’s and women’s teams are preparing for their first games on November 15th.  In order to kick-off the basketball season and get the students involved, Alvernia has a unique event called “Maroon & Gold night.”

On Thursday, November 9th, students at Alvernia lined up outside of the Physical Education Center, in order to get a good seat for the night’s event.  The long line of students standing in the cold showed the anticipation for the annual Maroon & Gold night.  Whether it was the free t-shirt promised to the first 500 students, or the excitement for the season, the dedication of the students at Alvernia was on full display.  “I look forward to Maroon & Gold night every year; it’s always a great time and I like seeing the different contests with the team and students,” Alvernia student, Hunter Guenzel, says.

The night started with some fun events to get the student body involved.  Contests such as musical chairs, relay races, and free-throw contests, allowed random students who were chosen a chance to compete and win special prizes.  These events were pretty comical and provided a fun atmosphere for all in attendance.  The students who were chosen for these events competed for prizes such as iPads, gift cards, and cash prizes.

After the fun competitions, the students were introduced to Alvernia’s Dance and Cheer teams.  They each had their own special routines for the night, and gave the students a sneak-peek of what they will do at the home basketball games.  At the conclusion of the performances, each member of the men’s and women’s basketball teams were announced and ran out to center court.  The starting line-ups were also announced, as well as the captains.  Alvernia debuted a new spotlight that was used when each player ran out.  This allowed the students to get familiar with the players they will be seeing throughout the season.  Alvernia Freshman basketball player, Rece Harman, was pleasantly surprised with the event.  “I was so surprised when I walked to the gym and saw the line of students waiting to get in; the whole night was a great time and I enjoyed it,” Harman says.

The night concluded with a scrimmage between the two teams and the faculty of Alvernia.  Professors, coaches, and other faculty participated in a brief scrimmage against the teams.  It was a fun event for everyone, as the students got to see some of their favorite faculty members struggle to compete against the teams.  Finally, the men’s team had a dunk contest, where they showed some of their athleticism and creativity.  While this year’s contestants didn’t have many great dunks, it was still a fun event for the players to participate in.  This year’s dunk contest champion, Anthony Dadson, was happy to win the event.  “I look forward to this contest every year, and I was glad to win it.  The students really help us out and provide a great atmosphere,” Dadson says.

Maroon & Gold night is a staple in Alvernia athletics, and it was a fun night for all who were in attendance.  In addition to introducing the teams, the event really got the student body involved and excited to come support the team.  Alvernia is known for having one of the best student sections in the MAC, and this was evident with the showing at the 2017 Maroon & Gold night.