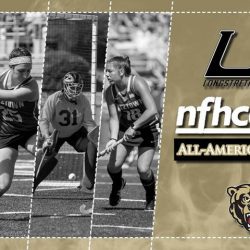 With three All-America selections in 2017, the Golden Bears field hockey program has now produced 39 total All-Americans, earning at least one player on the team for the fifth consecutive season. Additionally, the three members are the most for KU since the 2015 season, when Anna Behm, Kayla Denlinger and Rayann Fink all earned this distinction.

The Golden Bears lone first-teamer, Fuhrman, a sophomore midfielder, was responsible for facilitating the offensive attack this season, recording five goals and a team-high nine assists (third in PSAC). The Lancaster-product’s nine helpers rank in the top-10 all-time at KU for assists in a season. Fuhrman has started all 34 games in her career, racking up 23 points in her two seasons in Maroon and Gold. The All-America honor is the first for the sophomore from Manheim Township and the first selection for a Kutztown sophomore since Jenna Gregory in 2010.

As the go-to player on the offensive end for KU, Wozniak earned a spot on the second team, starting in all 18 games for the Golden Bears in her sophomore campaign, tallying a team-high 13 goals (fourth in PSAC), including five game-winners (second in PSAC), and recording one assist. She ranked first on the Golden Bears with 58 shots and 37 shots-on-goal. In her most impressive performance of the season, Wozniak scored two goals, including the game-winner, in KU’s 3-0 win over No. 1-ranked Shippensburg. The selection for Wozniak is her first All-America nod, joining Furhman as the second sophomore to receive this distinction, the first underclassmen duo to achieve this since Gregory and freshman Erin Reynolds in 2010.

Selected as a second team All-American, Hope, the steadying force between the pipes for the Golden Bears, served as KU’s starting goalie in all 18 contests of her senior campaign. In the PSAC, she ranked third in goals-against-average (1.143), save percentage (.811) and saves per game (5.0). Hope posted 11 wins and five shutouts for the Maroon and Gold in 2017, earning PSAC Player of the Week and National Field Hockey Coaches’ Association honors for her performance in a victory against No. 1 Shippensburg. Hope’s 1.45 career goals-against-average ranks third all-time at KU and she finishes her career with ten combined shutouts. This is also the first All-America honor for Hope, becoming the first KU goalkeeper to receive this accolade since Denlinger in 2015.