Studio B, Boyertown Announces Donation of $1200 from Tompkins VIST Bank for Upcoming Exhibition 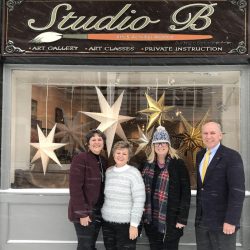 Studio B Fine Art Gallery, 39A East Philadelphia Avenue in Boyertown, PA, announces a donation of $1,200 from Tompkins VIST Bank toward sponsorship of the studio’s annual exhibit celebrating the area’s agricultural roots.

“We are delighted that Tompkins VIST Bank, a new bank member to the Boyertown community, is our sponsor for this exhibit,” added Susan Biebuyck, gallery director. “Their staff and associates will have a chance to meet our artists and ‘feel the love of the land’ our artists showcase in their artwork. As Studio B seeks to be a ‘go to’ place for community building, this is a wonderful time to create friendships with our neighboring bank,” she continued.

Fondly known as “The Farm,” this year’s exhibit “Farm/Earth” combines the studio’s 10th annual exhibit and members’ renewal celebrating the environment. As Susan Biebuyck, Studio B’s gallery director notes, “Without Earth you can’t Farm.” Offering an art exhibit on these themes confirms the second part of her observation: “And Earth without Art is ‘eh.’”

Prizes will be awarded on Friday night, including the coveted “Best In Show,” which nets the winner a cash prize as well as a featured spot during the agriculturally/environmentally-themed exhibit in 2019.

In 2017, the exhibit was entitled “Agri-CULTURE.” Biebuyck encouraged artists to respond to “culture,” the root of the word “agriculture” in their work. Jim Meehan was awarded Best in Show for his mixed media piece entitled “Stormy Weather,” earning him “Featured Artist 2018” designation.

Meehan considers himself a cartoonist like his father who was an artist for New York newspapers. Although he works from life, he finds satisfaction in drawing “from his head, visualizing things.” His iconic mixed media illustrations, created by pen and ink on paper, acrylic paint on canvas and mixed media collage, are highly detailed themed works. Meehan  says, “It’s as if I were explaining something to myself, working it out, surprising myself a bit. My best hope is that the visual ideas I create will be interesting for me to do and entertaining for the viewer.”

Meehan was born in Brooklyn, NY, graduated from Fordham University with a B.S. in psychology. He attended the School of Visual Arts for two years and then worked at the New York Daily News and in advertising while building his portfolio. He has been printed in many publications and participated in numerous group shows.

Juror is sculptor Val Bertoia of Bertoia Studios, Bally, PA. Biebuyck selects a juror from her network of artists, gallery directors, and directors of area art centers to choose winners for monied prizes

In the 1970’s, Bertoia’s work with his father, the reknowned Harry Bertoia, advanced his own body of work. He is intrigued with development of wind-driven generators inspired by his father’s inventive sounding-sculptures. Val formulates work using a combination of 6 directions—Earth-East-South-West-North-Sky and the 12-year Chinese animal chart based on 4-year sections in his design of the Valway. Managing Berotia Studios for 4 decades, Val has been numbering artwork made in the Studio; Val and his team have documented over 2,000 pieces (an average of over 50 artworks per year or about 1 per week.

Studio B opened its doors during Boyertown’s December 2008 Holiday Open House Tour and welcomed hundreds of members of the community to its premiere exhibit. In January 2009, “The Farm” served as the studio’s first juried themed exhibit, has been staged annually as its most popular “signature” exhibit, and continues to “pack the house” at its opening.

Donations to Studio B are tax deductible; Studio B is the home of the Arts and Activities Alliance, a committee of Building a Better Boyertown, a 501c3 organization.