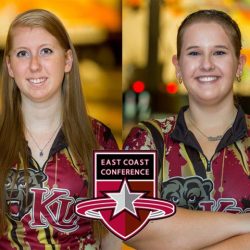 It is the third consecutive All-Conference recognition for Fitts, who was named to the First Team in each of the last two seasons. Entering this weekend, Fitts has appeared in all 111 matches for KU this season, and holds a team-high 18.52 frame average. She also maintained a team-high 82.6 filled-frame percentage.

Fitts was tied for 46th out of 174 overall participants at the United States Bowling Congress Individual Sectionals on Mar. 9, with 1,120 points in six baker matches. She received All-Tournament Second Team honors at KU’s Golden Bear Classic, Feb. 11, with a frame average of 18.623, and was named to the All-Tournament Team at KU’s Bowling for a KUre Tournament on Feb. 3.

Kozma received her second straight All-Conference honor, after earning First Team honors as a freshman last season. She appeared in all 111 matches this season and, entering this weekend, has a frame average of 18.30, and a 79.3 filled-frame percentage.

Kozma was named the ECC Bowler of the Week on Nov. 8, and was recognized on the All-Tournament Team at the Bowling for a KUre Tournament, ranking second with a 197.67 average. In KU’s last time out, she recorded a 17.05 frame average in a team-high 124 frames at the USBC Team Sectionals Mar. 11.