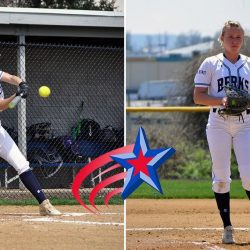 GANSEVOORT, N.Y. – Jess Rozick was named the North Eastern Athletic Conference (NEAC) Player of the Year and Pitcher of the Year and the Penn State Berks softball team had six members earn all-conference honors on May 3, as voted on by the league’s coaches.

Rozick and Hunter Hart were both selected to the All-NEAC First team. Becca Faust, Brianna Smith, and Val Miller were All-NEAC Second Team recipients, while Ashley Malek earned third team recognition. This is the first year that the awards were conference wide, in year’s past the awards were split up by North and South Division.

The Penn State Berks program has received the NEAC Pitcher of the Year award five straight years, with Rozick earning the accolade each of the last three seasons. This also marks the third straight season that a Berks member was named NEAC Player of the Year, after Jenna Heffner garnered the award in 2016 & 2017. Rozick has been named to the All-NEAC First Team for the second straight season. In the circle this season, Rozick sports an 11-5 record with a 1.31 ERA to go along with one save, 14 complete games, six shutouts, and 133 strikeouts in 101.2 innings of work. The junior right-hander leads the conference in wins, shutouts, strikeouts, and ERA. In NEAC contests, Rozick is 8-0 with just one run allowed for a 0.14 ERA with seven complete games and 87 strikeouts in 49.0 innings. At the plate, Rozick is batting .313 (15-for-48) with one double, one triple, nine runs scored, and three RBI.

Hart is the first Berks freshman to earn first team honors since Heffner, who received the honor in the 2014 season. The freshman left fielder is batting .330 (31-for-94) with nine doubles, two triples, two home runs, 18 RBI, and 16 runs scored. She sports a .356 on-base percentage and a .532 slugging percentage. Hart has recorded 12 multi-hit games and has driven in two or more runs in six contests. In NEAC competition, Hart is batting .468 (22-for-47) with six doubles, one triple, two homers, 16 RBI, and 12 runs scored. In the field, Hart has recorded 52 putouts and four assists and has a .966 fielding percentage.

Faust, who was an All-NEAC Second Team recipient last season, has started and played in all 27 contests so far this spring. The junior second baseman is batting .383 (31-for-81) with seven doubles, 21 RBI, and 12 runs scored. She sports a .469 slugging percentage and has a .407 on-base percentage. Faust has 11 multi-hit games, including five games with three hits. In NEAC games, Faust is batting .489 (22-for-45) with four doubles, 17 RBI, eight runs scored, and three stolen bases. In the field, Faust has a .971 fielding percentage after recording 38 putouts and 28 assists.

Smith has been a key piece to the Nittany Lions offense this season. The freshman first baseman is batting .426 (26-for-61) with six doubles, two home runs, 14 RBI, and eight runs scored. She has a .623 slugging percentage and a .462 on-base percentage. Smith has recorded eight multi-hit games this season and has hit safely in 16 of the 18 contests she has appeared in. Against NEAC opponents, Smith is batting .458 (22-for-48) with six doubles, two homers, 12 RBI, and six runs scored. Smith has been just as important in the field, where she has recorded 108 putouts and five assists and has a 1.000 fielding percentage.

Malek, who receives all-conference recognition for the third straight season, is batting .337 (29-for-86) with 15 doubles, one triple, 14 RBI, and 19 runs scored. She has recorded nine multi-hit games, including a pair of three hit performances. In NEAC contests, Malek is batting .333 (14-for-42) with six doubles, one triple, seven RBI, and 14 runs scored. Behind the plate, Malek has thrown out six of the 15 runners attempting to steal against her this season. She has not allowed a single stolen base against NEAC competition this season.