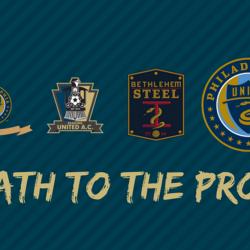 (May 3, 2018) – Reading United has announced the return of six Philadelphia Union Academy graduates to the club’s Premier Development League squad ahead of the 2018 campaign. Defenders Rob Campbell, Will Campbell, Mo Conde and Lamine Conte, along with midfielders Joe Dezart and Zach Zandi will form the core of new head coach Alan McCann’s loaded roster.

Rob Campbell, an outside back, returns to Reading for his second season with the club after completing his sophomore season with the Clemson Tigers. The Wallingford, Pennsylvania native played in eight games for Reading in 2018, including a standout performance in United’s stunning Open Cup upset of the New York Cosmos.

Will Campbell, a defender and brother of Rob Campbell, is back with Reading United for his fifth season. The former Union Academy star has featured in 22 matches over the course of his career with Reading. Campbell’s North Carolina Tar Heels team reached the College Cup Final Four.

Mo Conde, an outside back from the Florida International University, heads back to Reading for his third season with the club. The rising junior from Philadelphia, Pennsylvania featured in seven matches in his first season with the FIU Panthers since transferring from NAIA powerhouse, the University of Mobile. Conde, a member of the YSC Academy first ever graduating class in 2015, has played in 14 matches over two seasons with United.

Lamine Conte, who returns for his second season with the club, was a vital part of the United defense that allowed the fewest goals in the Mid-Atlantic Division. The Philadelphia, Pennsylvania native earned NAIA All-America Second Team honors during a superb sophomore season for the University of Mobile. The Union Academy alum has accepted a transfer to the University of Louisville, one of the premier programs in the Atlantic Coast Conference. Conte, a member of the YSC Academy’s Class of 2016, played in 11 matches for Reading in 2017.

Midfielder Joe Dezart, a rising junior for the Wake Forest Demon Deacons, makes his return to Reading United for a second PDL season. The Jackson, New Jersey native saw significant minutes with Wake Forest in 2017, helping the team earn 13 shutouts in his 19 matches. The powerful defensive midfielder saw limited action with Reading in 2017 but is set to make a bigger impact for the club in 2018. Dezart is part of YSC Academy’s Class of 2016.

Villanova University star midfielder Zach Zandi will be back with Reading United for a third season. Zandi, a West Chester, Pennsylvania native, was named the 2017 Philly Soccer 6 Player of the Year following his standout junior season with the Wildcats in which he registered three goals and an assist. The Union Academy alum has played in 15 matches throughout his Reading United career.

Discussing United’s role in the professional development of Union Academy alums, McCann said, “Reading provides another step in their development between the academy and Bethlehem Steel. It is an environment that has them train daily with the top young talents in the college game whilst also playing against high level opponents each week.” McCann also noted the important role the returning Union Academy alums play for the club saying, “To have them in our team helps massively. Many of our standout players over the years have been academy players.”

The Union Academy alums will be key to getting Reading United off to a fast start when the club begins play in 2018 with a U.S. Open Cup first round match against Maryland amateur powerhouse Christos FC on Wednesday, May 9 in a match hosted by Alvernia University at their all-new Alvernia University Stadium in Reading. United begin their 2018 PDL home schedule on Saturday, May 26 when they host FA Euro at Wilson High School’s Gurski Stadium.