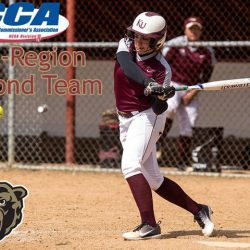 It is the first D2CCA regional honor for Keeny, who is also a three-time NFCA All-Region honoree. She is the first consensus All-Region player for KU since Danielle Amato earned NFCA and D2CCA First Team recognition in 2016.

The accolade adds to a growing list for Keeny in 2018, as she garnered All-PSAC East honors for the third year in a row.

In the KU record books, Keeny is tied for third all-time with 89 career stolen bases, which is tied for fourth all-time in PSAC history. Her .424 average at the plate ranks ninth all-time at KU for a season, and her .407 career average is tied for second all-time.