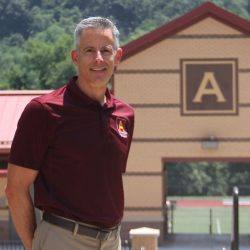 “We are excited to be starting our new women’s ice hockey program,” said Stiles. “Josh had success building an NCAA program from the ground up, and we are thrilled to add him to the Alvernia family.”

“The conversations we had with Penn State administrators and student-athletes who played for Josh underscore his commitment to development on and off the ice,” added Stiles. “We believe he will be an excellent addition to Alvernia’s athletics staff and are excited to see where he will lead the program.”

Prior to his time at Penn State, Brandwene has collected coaching experience at the men’s collegiate level as well as at the boys and girls prep school level. From 2008-10, Brandwene served as the head coach coach of the girls’ ice hockey program at the Kingswood-Oxford School in West Hartford, Connecticut before taking over the boys’ program from 2010-11.

“I am very excited to join an athletic department that is expanding intercollegiate athletics, and is committed to the growth of women’s ice hockey,” said Bradwene. “I’m honored to represent Alvernia University. I look forward to partnering with great colleagues, and building a quality women’s ice hockey program.”

Women’s Ice Hockey will be Alvernia’s 27th sport. Competition will begin in the fall of 2019. Alvernia will be just the seventh Division III college or university to sponsor Women’s Ice Hockey as a varsity sport, and will be the fifth member of the Middle Atlantic Conference which just wrapped up its inaugural season with Stevenson, Manhattanville, Lebanon Valley, and King’s all participating.  Wilkes University will join the league schedule in 2018-19 with Alvernia coming on board for the MAC’s third season.